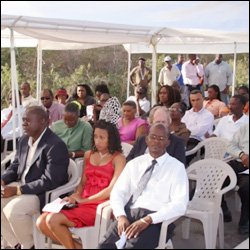 Premier of Nevis, the Hon. Joseph Parry in his remarks said that the Nevis Reformation Party (NRP)-led Administration thought it was time for a first class performing Arts Center in Nevis and added that through the assistance of the Taiwanese Government, the facility was expected to be completed by December 2010.

“The Nevis Island Cabinet felt that it was time to have a Performing Arts Centre to crown the development of performing arts in Nevis, in order to honor those from the past – those who are alive and those to come,” commented Mr. Parry.

The Premier also noted that there were a number of sons and daughters of the soil who had contributed to the Culture of Nevis and had not been publicly honoured. However, he said the new facility would bear the name of such a person.  In that case the honor would come posthumously.

“In light of recognising Nevisians who have contributed to the Arts, my Administration will name the Center after Nevisian Musician and Teacher Mr. Herald Sutton [who passed away over two years ago]. It is so wonderful for a young man like Herald to be recognised in this manner.”

According to Premier Parry, the Performing Arts Center will also be outfitted with a Conference Center facility where meetings can be held in comfort.  He said the facility would also be available to small hotels to assist the tourism market on the island.

The construction of the Center will be facilitated by Jamaican based Surrey Paving and Aggregate.

Mr. Parry said he was pleased that Jamaican contractors would construct the facility and was hopeful that Jamaican artists would bring their culture to Nevis for the benefit of residents.

“I have had the opportunity to witness the dance, drama and music of Jamaica, in and outside of Jamaica.  Many Nevisians might be surprised at the international level of their performance, which I believe might make Nevisians thirst for more,” he said.

The Premier thanked all who he said had worked tirelessly to take the project to the stage of construction and commended noted artists on the island who put much energy into the planning of the Center notably, Ms. Esther Brookes, Mr. Hezekiah and Mr. Amba Trott.

“Let us hope that in the construction stage we will get an excellent Fine Arts Center that can compete with any other performing arts theatre, Caribbean wide,” Mr. Parry concluded.