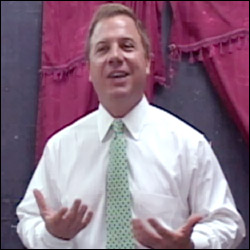 Developer of the wind farm project, Mark Tippit, has assured residents of Belle Vue that the placement of the wind turbines in their community will bring several benefits.

At a recent Community Meeting, Mr. Tippit, Founder and President of North Star, stated that once the construction phase of the project commenced the residents of Belle Vue and the surrounding community would be given first preference when it came to employment.  The groundbreaking is estimated to take place in July or August of this year.  The Founder of North Star said that another more long-term source of income could be connected with the fact that the wind turbines serve as a tourist attraction.  He suggested that the community’s entrepreneurs begin to look at opportunities within this specific avenue of eco-tourism.

Residents were further reassured that the livestock farming which had been originally intended for the area, could continue as planned.  The North Star President explained that the wind farm has a very small land footprint and it requires only five acres of land.  Additionally, he explained that once the foundations of the three turbines are fenced, animals will be allowed to graze freely right under the turbines.  It was noted that the turbines would be Vestas Wind Systems-manufactured V100s, each having a rotor diameter of 100 metres.

Additional aspects which Mr. Tippit said should benefit the Federation as a whole included a reduction in the use of fossil fuel-generated energy, electricity engineering grid upgrades and lower carbon emissions.  He explained that lower cabon emissions will allow the Federation to apply for carbon credits from the international body that addresses such matters.  A monetary value is attached to such credits.  Under the current agreement, the Federation is entitled to half of the money obtained from the carbon credits, President Tippit explained.

Noise created by the turbines was one of the concerns addressed.

“One of the things is that we’re fortunate, that we were able to locate the turbines fairly far up the slope, so they will be fairly far away from housing areas,” Mr. Tippit said.  “Other physical effects is that the majority of noise tends to be produced behind the turbines and because ours are pointing into the prevailing wind, the backs will be pointed toward that mountain.  Literally, the noise tends to blow in a cone behind the turbine so the majority of the sound will be going into the mountain.”

Another physical effect mentioned was flicker, which Mr. Tippit described as the flashing light that can be created as the sun hits the spinning turbines at a certain angle.  He explained that this also should not affect the residents of Belle Vue.

The North Star Founder took the opportunity to explain a bit about his organization.

“North Star is a development Company working in partnership with Mass Energy out of Florida which undertakes debt financing and equity financing,”  Mr Tippit explained.  “Manitoba Wind Energy Consulting and Contracting is an engineering firm out of Florida who did the analysis and engineering for the project.  The contractor for the Engineering Procurement Construction (EPC) of the project is Manitoba Hydro out of Canada.”

The North Star Founder informed that this contractor was chosen because Manitoba, Canada has many small towns with electrical grids similar to the one in St. Kitts.  Additionally, he elaborated, these Canadian towns have a public utilities requirement to integrate wind, solar power and any other form of renewable energy that a private developer would want to bring onto the grid.

Other presenters at the Community Meeting were Constituency Representative for the area Honourable Dr. Timothy Harris, Director of Physical Planning and Environment Mr, Randolph Edmeade, and Acting General Manager of the Electricity Department Mr. Bertill Browne.