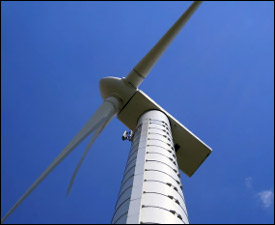 Approximately 10 to 15 percent of the overall capacity of the National Grid will be supplied by wind energy upon the completion of Phase I of the North Star Project at Belle Vue, St. Kitts.

This is according to Mark Tippit, Founder and President of North Star, a US-based real estate and renewable energy company, which also operates in the Caribbean and Central America.  He outlined that closer to 10 percent will be supplied at night when there is a decrease in demand for power, since most people are sleeping.  On the other hand, closer to 15 percent will be provided during the day when persons are busy with domestic and business pursuits.  The mentioned energy will be generated by three 1.8 megawatt wind turbines (wind mills) which are being manufactured by Vestas Wind Systems out of Denmark.  President Tippit said that the three turbines will produce 5.4 megawatts of power but the constant average supply will be 2.7 megawatts.  He said that this will power 3,000 homes.

Mr. Bertill Browne, Acting General Manager of the Electricity Department stressed that the ultimate objective for incorporating the use of wind-powered energy was efficiency.

“The main aim is to reduce the cost of generating electricity,” Mr. Brown said.  “Reduce diesel imports and add a greener generation of electricity.”

The Acting General Manager also explained that while the electricity generated could supply 3,000 homes, it would not be specific dwellings but rather this energy would go directly to the national grid and be dispersed accordingly.

Honourable Dr. Timothy Harris, Senior Minister and Parliamentary Representative for the area, agreed with the reduced electricity generation cost objective and noted that St. Kitts and Nevis was among many other countries doing likewise.  He commended North Star and its founder Mark Tippit and assured his constituents, who attended last Friday’s meeting at the Edgar T. Morris Primary School, that the 500 acres on the site would be used for its original purpose of livestock farming.

“After some representation and field visits, we were able to sort out the matter,” Minister Harris emphasized.  “It is my understanding, that substantially all the land now remains available for agricultural purposes.”

Mr. Randolph Edmeade, Director of Physical Planning and Environment, noted that it was after careful investigations of other methods of renewable energy that the Government of St. Kitts and Nevis decided on wind energy after reviewing reports from the Renewable Energy Committee.  He detailed that the experimental tower placed at Belle Vue had such pleasing results that it was decided to construct the three turbines in Phase I of the project, on that site.

President Tippit explained that once the three turbines were delivered on time and there were not too many unexpected challenges, the groundbreaking for Phase I of the North Star Project would take place in July or August, 2011.