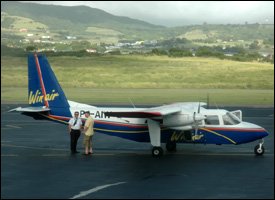 The Government of St. Kitts and Nevis said Friday that WINAIR, the St. Maarten-based will cease scheduled service to St. Kitts later this month.

WINAIR recently informed Government of its decision to stop flying into the Robert L. Bradshaw International Airport after 30 years of service, a move which will leave LIAT as the only schuled carrier between St. Kitts and the Dutch/French Caribbean island.

“Subsequent discussions with the airline officials have revealed that WINAIR continues to feel the impact of increased competition, fluctuating fuel prices, and the increase in other operational costs. WINAIR alluded to a decreasing trend in passenger volume from St. Kitts, and has deemed the recent losses unsustainable, and has made a decision to discontinue its services to and from St. Kitts by March 29, 2009,” said Minister of State for Information, Sen. the Hon. Nigel Carty.

Mr. Carty disclosed that Government requested a full analysis from WINAIR with a view to exploring how it could assist in keeping the services of the airline in St. Kitts.

“However, there was no scenario presented by WINAIR that made an economically-acceptable case for the government to pursue,” said Minister Carty.

He said Government wishes WINAIR well in all of its endeavours as it services other parts of the region.

“Government has already made official contact with LIAT to ensure that any slack created by the discontinuation of WINAIR’s services can be picked up by that airline,” said Mr. Carty.

WINAIR recently announced it was cutting Dominica, Nevis, Tortola and St. Kitts from its schedule and reducing its service to Antigua to a weekly flight.