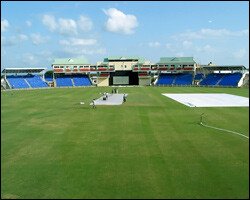 The vision of a redesigned and refurbished Warner Park as a center for hosting world class sporting and entertainment events continues to come to fruition.

Warner Park cricket stadium ““ considered by internationally-renowned stadium consultant Donald Lockerbie, as one of the best in the Caribbean ““ will feature a first class cricket clash between Jamaica and the Leeward Islands over the January 15 to 18 weekend. Meanwhile, on Saturday, 16th, a major event featuring Wyclef Jean will take place next door in the football stadium.

This weekend signals the first of many regional/international events taking place at the premier facility between January and June this year. The OECS calendar lists St. Kitts as the venue for the Courts Club Netball Championships in April.

In June, it will be the men’s turn to enjoy the cricket spotlight in the Federation. South Africa will face off against the host, West Indies, in the second of a three test series from the 19th to 22nd. Just two days later on June 24, the exciting St. Kitts Music Festival returns with a lineup of top international music artistes.

“Warner Park continues to be one of the main attractions of sports tourism in the Eastern Caribbean,” Director of Sports, Dave Connor, told SKNIS. “Last year was very successful for us and we are looking forward to consolidate gains and promote even greater use of the facilities in 2010.”

The sporting complex, which also boasts the Pam Tyson netball stadium, and tennis courts will welcome four clubs from the United Kingdom, who have already confirmed travel arrangements to train in the Federation. Mr. Connor indicated that the Dunnington Cricket Club, Manchester Grammar School, Rossall School and Parkside School will be engaged in cricket, netball and football activities when they visit between the months of March and April.

Frequent visits by these and other clubs have served to raise the talents of local athletes and officials. A number of workshops have been conducted by various visiting athletes and musicians in a bid to pass on their knowledge.

Mr. Connor added that Warner Park has also served to attract a different type of audience as cruise passengers now visit the first-class facility to take and pose for photos.

“We are very proud of the sporting infrastructure in St. Kitts and Nevis and are appealing to all individuals to join with us in protecting these investments,” he concluded.