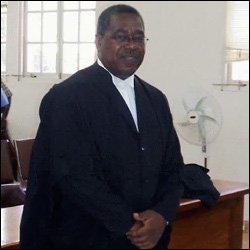 The Governor-General was today advised by the Leader of the Opposition the Hon Mark Brantley that a senator had been selected to fulfill the constitutional complement on the opposition bench in the National Assembly.

In a show of collegiality that demonstrates that the members on the opposition benches put country above party or individuals the PAM was invited to recommend the Opposition Senator. Political Leader of the PAM Mr. Lindsay Grant communicated the party’s choice to Mr. Brantley naming Barrister and Solicitor Mr. Vincent Byron Jr.

Mr. Byron is a former teacher and sportsman who holds degrees from the University of the West Indies, the New York Institute of Technology and the University of Wolverhampton. He is an active member of the community with a long history of contributing to the social and cultural development of St. Kitts and Nevis. He is happily married to Mrs. Gloria Byron and they have two adult children.

In announcing the recommendation of Mr. Byron Political Leader of the People’s Action Movement Mr. Lindsay Grant stated that several factors and persons were considered in making the choice.

“I must advise that after reflecting on what is needed at this time, we concluded that each person on our short list was duly qualified to be a senator in any parliament.”

However he stated that the party has particular priorities at the moment and Mr. Byron’s legal training and his intimate knowledge of and involvement in the litigation surrounding the electoral laws and constitution over the past two years set him apart from the rest.

“We intend to form the Government sooner rather than later. We also looked at the fact that with such a slim majority Governments’ legislative agenda may be self serving at best and that debating new and controversial legislation was important. We also considered that we as an opposition may wish for the first time to draft bills and present such in the Assembly,” Grant said.

This appointment is the second time since the People’s Action Movement has been in opposition that the party has appointed a senator to the National Assembly and is a strong indication of the party’s improving political fortunes.

In outlining his own agenda Mr. Byron declared that “the petition case and the voters list are the most important issues at the moment and I will continue to work hard on those matters. Despite these matters though I look forward to working with my party and colleagues on the pressing matters of state.”

A Management and Financial Consultant, and a skilled practitioner and instructor of computer information technology, Vincent Byron is a well-known sports and music personality. He represented St. Kitts at the National level in both cricket and football between 1973 and 1982. He served as a radio and television sports commentator.

He worked as a Bandleader of the Caribbean Heet Waves Musical Orchestra in St. Kitts, Nevis, Anguilla, St. Maarten, St. Eustatius and Montserrat from 1975 to 1982. In addition, he was a graduate teacher of West Indian and European History at the Basseterre High School for several years.

Vincent is married to Mrs. Gloria Byron, and is the father of Tanya and Justin Byron, has worked in public administration as National Instructor of the Health Management Information System. He installed and maintained the primary healthcare database and trained public health personnel in computer use.

He was Deputy Census Officer for the 1991 Population and Housing Census, in charge of day-to-day management and planning.

Vincent’s is the younger brother of Chief Justice of the Eastern Caribbean Supreme Court, the Right Honourable Sir Dennis Byron and former St.Kitts-Nevis Amabassador to the Republic of Taiwan Lawyer Terence Byron .