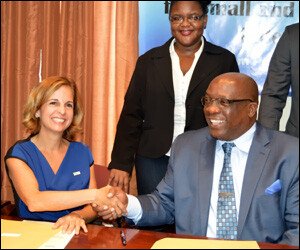 The Government of St. Kitts and Nevis has signed a loan agreement of US$5 million with the Government of the Bolivarian Republic of Venezuela through the Petrleos de Venezuela S.A. (PDVSA) agreement which is intended to help business aspirants to set up small to medium size enterprises (SME’s) within the Federation.

The handing over ceremony took place in the board room of the Development Bank of St. Kitts and Nevis (DBSKN) with Prime Minister of St. Kitts and Nevis, Dr. the Honourable Timothy Harris; General Manager of PDVSA, Maria Colmenares; Charge D’affaires in the Venezuelan Embassy, Monica Liendo Lopez; the Honourable Ian “Patches” Liburd, Minister of Public Infrastructure, Posts, Urban Development and Transport; General Manager of the DBSKN, Lenworth Harris; and two witnesses to the signing.

The US$5 million will be placed in a special fund for what is dubbed as the “Fresh Start Project” to be administered by the DBSKN and would be ready to be accessed by persons as early as next week.

Some of the SME’s that the fund will target include rural community shops, supermarkets, bars and restaurants, fishermen, taxi operators, commuter buses, equipment for those involved in masonry and carpentry, trucking and earth moving equipment, videography and photography, barber shops and salons.

According to the General Manager of the DBSKN, Mr. Harris, the maximum loan per person shall not be more than US$100,000 at an interest rate that should not exceed five percent. Mr. Harris also outlined that repayment of the loan will be based on the nature of the business that is being funded and where the repayment can start almost immediately on a reducing balance basis whether with monthly or weekly installments as appropriate.

Mr. Harris also gave the guarantee that regular quarterly reports and annual audits of the programme will be done and the reports given to the Government and PDVSA.

Prime Minister Harris, along with Minister Liburd respectively, hailed the signing of the loan agreement as “another signal moment for us in St. Kitts and Nevis that shows in a very effective way how the Team Unity Administration has been leveraging its foreign policy in ways that redound to the benefit of the ordinary citizens of St. Kitts and Nevis” and “another commitment of Team Unity in terms of giving everybody a fresh start”.

“When we think of the PetroCaribe Agreement ,most people just think of oil, supplying fuel for our generation plant, but it’s much more than oil, it’s about our social, cultural and of course economic development,” Minister Liburd said, stressing that “this is only the start of many more things to come under PetroCaribe”.

Echoing the views of Minister Liburd, PDVSA Manager Maria Colmenares, said the agreement “goes beyond the trade of oil” to “the development of the people, culture and any other thing”.

Prime Minister Dr. the Honourable Timothy Harris gave the assurance that “the fund will not be contaminated by the preference of the Government”.

Prime Minister Harris mentioned that the first initiative with the Government and People of Venezuela through the PDVSA arrangement was a grant of EC$ 16 million “to satisfy the felt needs of former sugar workers who felt shortchanged when in 2005 the industry was closed”.

“This like the 16 million EC dollars for the former sugar workers is targeting those who need the support most, and this particular arrangement which we call the Fresh Start Project is intended to give a fresh start to young and not so young entrepreneurs, those who otherwise are finding it difficult to be able to access financing from the commercial financial institutions”¦it is intended to help the ordinary citizens””poor, independent-minded, ambitious””who want to make a fresh start on their own, who want to be able to create their own jobs, who want to be able to determine their rate of inflows if given a try at business venture and this is what it is intended to do,” Prime Minister Harris said.

Prime Minister Harris said that in part the agreement signed between his Government and PDVSA reads: “To remove the equity hurdle requirement where it represents a barrier to the target group starting or rebuilding of a small to medium size business venture”.