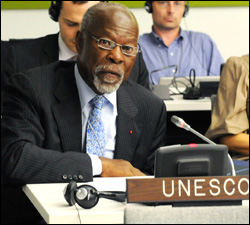 President of the General Conference of UNESCO, Dr. Davidson Hepburn said urgent action is necessary on climate change as small islands developing states (SIDS) are among countries most vulnerable to sea-level rise as well as intense and prolonged weather phenomena.

President Hepburn remarks to delegates across the Caribbean Region attending the March 08 and 09 conference on Climate Change and Ethical Principles in St. Kitts and Nevis stressed that “tourism is vital to the regional economy, and fixed tourism infrastructures are often highly vulnerable.”

“Similarly, agricultural productivity may be strongly affected by factors such as temperature change by, salt water aquifer intrusion and by modified precipitations patterns,” he added.

“The conclusion is a stark one: the Caribbean region will experience serious negative impacts from climate change,” the UNESCO head said.

“As a staunch advocate of international cooperation, I would also like to insist on the necessity of building solidarity among the most vulnerable, and between them and those who have the capacity to help,” explained Dr. Hepburn. “”¦ I am convinced therefore, that a foundation has been laid and the voice of small states would be enhanced at the 36th session of the UNESCO General Conference.”

He said he was pleased that the meeting at the St. Kitts Marriott Resort is providing support for the work of Caribbean expert networks, reinforcing scientific cooperation in order to enhance participation in world science and will allow UNESCO to better understand Caribbean concerns.

“Adaptation is not solely about sectoral policies ““ agriculture, health, tourism, housing, and so on. Confronting climate change entails preparing people everywhere to act as responsible citizens in a world that needs to be protected if we wish to keep on enjoying its beauty and richness,” the UNESCO President stressed.

Dr. Hepburn disclosed that UNESCO intended to continue discussions on this topic when it holds a high level Conference on Education and Climate Change, in the Bahamas in September of this year.