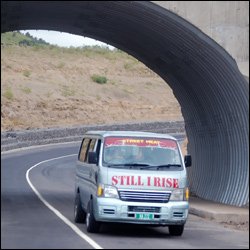 A Christmas and Carnival gift for drivers on St. Kitts.

Traffic is flowing on the full length of the new West Basseterre Bypass Road from the Camps Roundabout to the Kim Collins Roundabout.

All the asphalt works have been completed. Road markings although incomplete include centre lines, junction road markings and the primary traffic signs.

All the junctions except for the Buckley’s junction have been completed.

CUOPM has learnt that the Buckley’s junction as originally planned was a 3 arm Tee junction providing access to the North Buckely’s/Olivee’s housing development. Priority to traffic was on the By Pass Road.

Further, the adjacent Beacon Heights Housing Development had planned for a junction on the island main road in the Camps area.  To avoid a situation of having too many major junctions on the island main road in close proximity, an opportunity to have a five arm roundabout at Buckley’s was explored to accommodate a link road to the Beacon Heights Housing Development.

After due consultation with all the stakeholders a five arm roundabout junction option was agreed in early December 2009.  Construction works for this junction will commence in early January 2010 and the works will be completed by the end of February 2010.

In the interim period traffic will be permitted to use this section of the Bypass Road and the roundabout works will be progressed in the same manner as the Camps roundabout, which was successfully constructed with minimal impact to traffic flows.

The Public Works Department has liaised with the Lands and Surveys Department and have engineered a drainage system that collects the surface water from the Camps Roundabout and than conducts it to an outfall to the sea.

Works on this drainage system is scheduled to commence in the first quarter of 2010.  In the meantime, a temporary earthen drain has been constructed to manage the surface water from the Camps roundabout.

CUOPM has been informed that at present 30% of the Shadwell Link Road has been completed up to the junction of the BNTF concrete road to the Shadwell housing development.

Construction has commenced on the new bridge over the College Street Ghut.  The western abutment footing has been concreted together with 50% of the abutment wall.

The bridge together with the remaining road works is due to be completed by the end of April 2010.