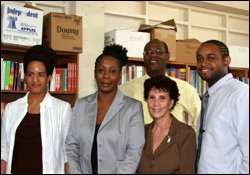 Cuban Ambassador to St. Kitts and Nevis Her Excellency Mrs. Ana Marie Gonzales said the Travelling Caribbean Film Festival will offer Nevisians an opportunity to experience the culture of others in the region through film and would help to foster cultural integration in the region which was necessary in hard economic times.

She made the comment on January 29, when she met with the press at the Community Centre in Bath during a visit to promote the event. The Ambassador was accompanied by Ms. Marlene Phillips chairperson of the organising committee for the Travelling Caribbean Film Festival in St. Kitts. They were joined by Director of Community Cohesion Mr Abdul Kareem Ahmed, Community Coordinator Mr. C.J. Bartlette and Director of the Nevis Cultural Foundation Ms. Tonya Powell.

“These films will allow us to share and to have more information about the different cultures. For the Caribbean down to the south it is a necessity especially in this world situation and in fact the economic situation to integrate as soon as possible and one of the ways is through cultural integration.

“Cuba as usual has been a link with this festival with the rest of the Caribbean films and we are ready to support all this movement in St. Kitts and here in Nevis,” she said.

According to the Ambassador, the movement to promote Caribbean cinematography had been ongoing for a few years and Jamaican like Cuban, Martiniquan and Curaconian film makers had played an important role.

She outlined three key objectives of the film showcase ““ to promote cinematography andd film makers in the region and Latin America; to impart educational messages to children and to promote cultural integration.

The Travelling Caribbean Film Showcase is a non profit cultural project which already commenced its second tour of presentations through 31 countries in the region. It is ongoing in St. Kitts and is scheduled to be launched in Nevis on February 1st at the Pinneys Beach Hotel.

This year its focus is on children and youth in three categories 5-8, 8-12 and those older than 12 and includes shorts, features, documentaries and animation from the spectrum of countries in the greater Caribbean including 12 island nations and Venezuela, Colombia, Nicaragua, Belize and Costa Rica.

The film showcase has received sponsorship from United Nations Educational, Scientific and Cultural Organization (UNESCO), United Nations Children’s Fund (UNICEF) the University of the West Indies and other regional institutions.

Mr. Bartlette listed the schedule and noted that students of the Maude Crosse Preparatory, Belle Vue Primary School and Charlestown Primary School view the films at the Cultural Centre on Monday February 02.

On Tuesday February 03 the students of the St. Thomas Primary School, Lynn Jeffers and the Joycelyn Liburd Primary School will view the films at the Cultural Centre and various school rooms.

Students of the V.O. J. Nicholls Primary School and St. James Primary will be viewing at their schools on February 04.

On the following day February 05 students of the St. Johns will view the films at the Nelson Mandela Centre while Ivor Walters Primary Schools students will view at their school.

On Friday February 06 students of the Gingerland Secondary and Charlestown Secondary Schools will view at their respective schools. The first public viewing will commence at 7pm at Night Moves in Charlestown and at the same time at the Cultural Complex on February 07.