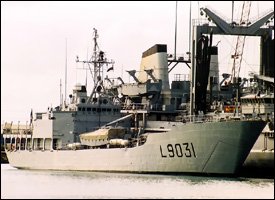 A French naval transport ship, Francis Garnier, which is to be decommissioned later this year, is on its first visit to St. Kitts and Nevis.

“We have been in the Caribbean and have never visited St. Kitts. This is our final call before returning to Europe later this year and so it is a good occasion to visit and meet you, Prime Minister,” said the Commanding Officer, Lt. Benoit Dubois during the visit on Friday morning.

“It is from here that other French and European powers established their settlements,” said Dr. Douglas.

He expressed thank to Lt. Dubois for the humanitarian assistance the ship and its officers have been giving to Grenada, following Hurricane Ivan in 2004, and to Jamaica in 2004 and recently to Haiti and other countries affected by natural disasters.

Dr. Douglas wished Lt. Dubois would have fond memories of St. Kitts and Nevis and the Caribbean.