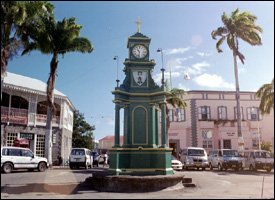 The Circus Re-Beautification Project will be successfully completed on Sunday, when the dead Royal Palm Trees are uprooted, and new palm trees are planted.

That announcement was made by the St. Kitts Tourism Authority, which is spearheading the project, along with assistance from the Electricity Department, Park and Beaches Unit, TDC and Ottley’s Plantation Inn.

“The Circus Palm Tree Project began early in 2008 when it was observed that several of the royal palm trees in the Circus were dying,” said Dele Adams, Corporate Communications Assistant at the Tourism Authority.  “Recognizing the beauty of the trees, a committee was formed to address the issue. It was decided to cut down and replace the palms with some that were grown in the nursery at Ottley’s Plantation Inn.”

Adams said the replanting process will begin at 7 a.m. Sunday morning. He also pointed out that already the new palms from Ottley’s Estate have already been extracted and have been prepped for Sunday’s planting.

Royal palm trees are native to the West Indies and due to their widely considered beauty are widely used for decorative purposes. They grow between 10 and 30 meters tall in an ideal environment with plenty of water.