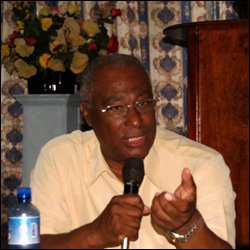 Premier of Nevis, the Hon. Joseph Parry applauded the Nevis Island Administration’s (NIA) Legal Adviser and Federal Parliamentarian, Hon. Patrice Nisbett, for a job well done at negotiating for geothermal exploration in Nevis with West Indies Power.   In addition, he showered praise on the young politician for his work on the land deal with Newfound and the numerous projects and programs already done or upcoming for the people of St. James Parish.

The Premier expressed his delight in the leadership capabilities of the St. James Nevis Reformation Party (NRP) Candidate, during a Town Hall Meeting at the Church of God in Brick-Kiln on Monday night.

“I am very happy to be here in Brick-Kiln with the Hon. Patrice Nisbett. Let me emphasize that the St. James’ Parish representative in the local parliament is not an NRP, but since the NRP has been in power, look at what the administration led by the NRP has done! It has done more for St. James and Brick-Kiln in two and a half years than what was done in 14 years by the previous administration; and many of the things done was because of the Hon. Patrice Nisbett, who has fought hard for the people of St. James,” declared Premier Parry.

The Premier stated that there has been some in the Opposition that say the NRP had given away geothermal. However, the reality of geothermal ownership under the past administration in Nevis is that most, if not all, of the ownership of geothermal was given to St. Kitts. Mr. Parry continued, that due to the leadership, extreme negotiating skills and legal know-how of the Hon. Patrice Nisbett, we (the island of Nevis) gained back geothermal through the strong negotiations of the NRP led Cabinet in local parliament.

“In the Parish of St. James, The Hon. Patrice Nisbett has sought to fix playfields for VOJN primary school, more developments in housing, increased recreational facilities, brought the price of land down significantly and made 71 lots available at Garniers Estates,” said the Premier.

According to the Premier, in 2000 he chose the Hon. Patrice Nisbett to take over from him as a member of the Federal Parliament and to join the NRP because he (the Premier) believed that the young Patrice Nisbett had tremendous vision and a great future ahead of him!

The meeting was well received by a large crowd of mostly young people, who participated fully by asking well informed questions of the panel.