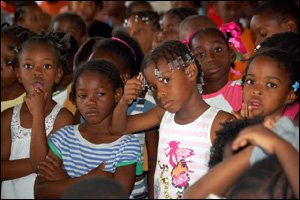 Another call by St. Kitts and Nevis Prime Minister Hon. Dr. Denzil L. Douglas for the nation to become involved in the lives of children.

Describing as “shocking and heartbreaking” the arrest and charge of a 10-year-old Primary School student for the death of 14-year-old High School student and the rape of a seven-year-old girl by a 39-year-old male, Dr. Douglas all must do their part to avoid re-occurrences.

Speaking on his weekly one-hour radio programme “Ask the Prime Minister, Dr. Douglas again extend heartfelt concern and support to all of the parents and families involved and also appealed to parents and the community to “seriously look out for each other’s children from the moment they begin to walk to adolescent.”

“We really have no choice but to go back to the old ways, when everybody was involved in everybody else’s children lives.  When we know that something awful is taking place in some home somewhere, we have to report it to the police or someone in authority. Because if we just grumble to each other about the wrongdoing”¦.or worse yet, just shrug and go our way, we had better realise that we will, for sure, be guaranteeing the extreme suffering of some other child,” said Dr. Douglas, adding: “For the millionth time, let us open our eyes and see what is going on around us.  Let us listen, let us hear, and let us speak up for those who are too small to speak for themselves.”

As children are home for the Easter holidays, Dr. Douglas announced that on their return, principals and teachers are going to have to have some really serious talks with the students.

“And I hope that the adults around them are really talking to them, now that they are home on holidays, about everybody doing their part to avoid these types of tragedies happening again.  Holy Week is the perfect time for us to re-think how we are living, how our children are living, and what it takes to build safe, healthy, and decent communities,” said Prime Minister Douglas.