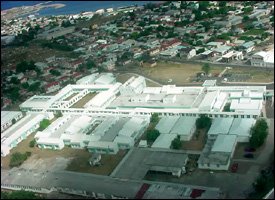 An Aerial View Of The JNF Hospital – St. Kitts
Photo By Erasmus Williams

St. Kitts and Nevis has invested much time and effort to mitigate and reduce the impact of disasters on health facilities.

In a message to mark World Health Day on Tuesday, Minister of Health, Hon. Rupert Herbert re-affirmed his Ministry’s commitment to the Safe Hospitals Initiative in conjunction with the Pan American Health Organization (PAHO) and has embarked on a programme to strengthen communities through Safer Health Facilities.

He said that the project aims to improve the ability of hospitals to remain functional in the event of natural disasters.

“The hospital safety index assessed the existing safety level in our health facilities, should they be affected by a disaster. This instrument helped us to develop a list of priority aspects in which to take corrective measures and monitor progress. The safe hospital checklist evaluated structural, non-structural and functional aspects of our Hospitals,” said Minister Herbert.

He said that his Ministry is awaiting the official report from PAHO in order for to institute corrective measures.

Minister Herbert said that experiences from past hurricanes have necessitated the incorporation of disaster mitigation measures in the construction process of new health facilities in the Federation.

He noted that during the re-construction of the J. N. France General Hospital, the Ministry worked closely with engineering consultants attached to the PAHO to ensure a safer hospital.

“Some of these measures included, but are not limited to windows that can withstand the force of a Category Five hurricane, reinforced walls and roofs to enhance the structural integrity of the building, carefully placed Intensive Care Unit (ICU) and Operation theatres inside of the building for added protection in the event of a disaster, and increased generator capacity, in the event of extended power loss,” said the Health Minister.

He said that the recently commissioned Pogson Medical Centre in Sandy Point was able to incorporate many Disaster Mitigation Measures during the construction process and is complete with fire stations throughout the facility.

Mr. Herbert said that the training of health workers and other personnel in disaster management must never be overlooked and the Ministry, in conjunction with PAHO and the National Emergency Management Agency (NEMA) has conducted workshops and successfully trained persons from the Health Sector and other first responders, in Mass Casualty Management (MCM), Emergency Care and Treatment (ECAT) and Logistics Supplies System (LSS).

He said that training and planning for disasters is an ongoing process. “It is for that reason that the Ministry, through the office of the Health Disaster Coordinator, has requested support from the Pan American Health Organization, to conduct more of these training sessions later this year,” said Mr. Herbert.

He said that if attempts at reducing the impact of disasters on the local Health System are to be successful, not only is training important, but also the implementation of Hospital and Health Centre Emergency Plans.

“I am delighted to state that these are very much a part of our disaster mitigation process.  The health sector has written emergency response plans to deal with disasters. These plans have been tested through simulation exercises and are subject to revision before the end of this year. It is interesting to note that one of the activities scheduled for today is a test of the Hospital Emergency Plan. This is important, as it is only through reviews and exercise simulations that we can improve the planning process,” said Health Minister Herbert.

The Ministry of Health also has in place an Avian Influenza pandemic plan. He said the plan is Federal in scope and is scheduled to be strengthened through a major simulation exercise in conjunction with the Pan American Health Organisation later this year.

Minister Herbert said the theme for World Health Day 2009, “Health Facilities in Emergencies” is appropriate in this era of climate change and its negative global impact.

“It is my hope that this year’s theme will serve to strengthen Health Disaster Management and Coordination in the Federation of St. Kitts and Nevis, ensuring that critical functions in our health Institutions are maintained, and that the system’s ability to respond in the aftermath of disasters remains intact,” said Mr. Herbert.