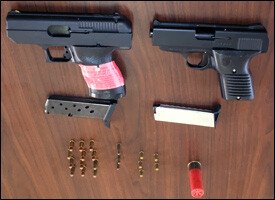 At about 11:15 a.m on Sunday October 11th 2009, police responded to a report of shooting at Fiennes Avenue. Investigations revealed that a group of young men were sitting on a lounge chair in an alley between Fiennes and Thibou Avenues, when they were approached by two masked men who opened fire on them. Glen Browne of Dorset sustained multiple injuries and was taken to the JNF Hospital where he was treated and warded.

The officers of Operation Future visited the Maurice Hillier and Irishtown Primary Schools on October 7th and 9th respectively. The group, under the leadership of its founder Const. Lauston Percival conducted morning assembly at the Schools and made presentations warning students of the dangers of gangs and crime. In delivering their message, the group was assisted by Ms. Jacinth “Shaki” Smithen who sang for the students of Maurice Hillier, while the students at the Irish Town Primary were treated to a power point presentation on the evolution and history of gangs by Mr. Dan Mac Mullin, a former member of the Royal Canadian Mounted Police and criminal defense lawyer in Canada who now resides in Nevis. The presentation highlighted some of the admonishments of Stanley Tookie Williams, founder of the Crips. He told them gang members commit violence on their own people, destroying themselves through hate and that gang members enslave themselves and others by using and selling drugs, creating addicts. The students listened attentively and at the end of the presentation, they correctly answered questions on the subject and received prizes compliments of Digicel, the group’s sponsor. Mr. Mac Mullin presented a number of children books on the danger of gangs, written by Stanley Williams while on death row. The books were presented to the school’s principal Mr. Elvis Charles, for use in the library. Mr. Charles thanked Mr. Mac Mullin for the books and commended Operation Future for their efforts at providing students with the necessary skills to resist negative influences.

The series of operations to improve safety and security on the island continued on Friday 9th October 2009, when officers of the Traffic Department and other stations, assisted by members of the St.Kitts-Nevis Defence Force, conducted a Vehicle Check Point (VCP) operation on the outskirts of Basseterre. Motorists entering Basseterre from the eastern, western and northern sides of the island were stopped and their vehicles checked for compliance with the traffic laws.

Eighteen vehicles were found to be heavily tinted beyond what the law permits, and were required to have the tints removed. Twenty drivers were issued with traffic tickets for offences ranging from driving with defective number plates to driving unlicensed vehicle. Two vehicles that were found to be uninsured were seized and detained in police custody. Again the High Command of the Police Force wishes to thank members of the travelling public for their cooperation with the security forces
during these operations.

On Saturday 10th October 2009, a passenger from a Liat flight out of Puerto Rico presented himself to customs at the RLB Airport to be checked. A search of his luggage by the Customs Officer on duty revealed a 9mm and a .380 pistol along with 12 rounds of assorted ammunition. The weapons and ammunition were seized and turned over to the police along with the passenger. The passenger, Demitrius Martin 39yrs of Conaree was arrested and charged for possession of firearm and possession of ammunition. He remains in police custody and is expected to be charged by the Customs Department with customs related offences.