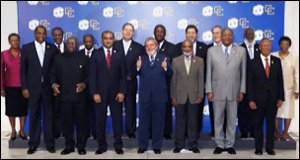 The inaugural Caribbean Community (CARICOM) – Brazil summit ended in Brasilia, Brazil on Monday, with the Caribbean expressing confidence that the meeting provided an opportunity for productive discussions on issues of mutual interest to both sides and improve their relations.

“While the close ties between CARICOM and Brazil have been established for a number of years, this inaugural meeting is historic and timely,” said Dominica’s Prime Minister Hon. Roosevelt Skerrit, the present Chairman of the 15-member regional grouping.

Mr. Skerrit made reference to efforts by Brazil and CARICOM in the past to improve their trade and economic relations, saying that the region was heartened by the confirmation that Brazil was prepared to proceed with flexibility and generosity and that a united, CARICOM and Brazil could build a new economic and commercial geography.

“This inaugural meeting is a tangible expression of that intent and commitment to establish such a partnership and to further existing cooperation initiatives,” Skerrit said, adding that CARICOM is also committed to deepening the regional integration system.

“As such, we welcome the initiative of Brazil to carve out a space for Heads of State and Government of Latin America and the Caribbean (CALC) to dialogue,” he said, recalling the 2008 meeting whose objectives “were to strengthen regional integration and to institute effective commitment for joint action; to promote the sustainable development of the peoples of Latin America and the Caribbean.”

The Dominica leader said the region was now looking forward to the third CALC summit in 2011.

Prime Minister Skerritt said CARICOM also welcomed Brazil’s commitment to deepening relations through the establishment of embassies in 14 Caribbean and assisting in the efforts to curb the rise in HIV/AIDS in the region.

He said that the summit would end with a CARICOM-Brazil Technical Cooperation Agreement addressing 16 areas of cooperation, including agriculture, health, tourism and transportation.

Skerrit said he was also pleased that the summit would devote attention to the plight of Haiti following the devastation caused by the 7.0 magnitude earthquake on January 12.

“My colleague Heads of Government and I are most appreciative at the quantum of assistance that your country has generously provided to  Haiti in its hour of distress and profound need,” Skerrit said, noting that Brazil has displayed exceptional leadership since 2004 by providing support to the development of Haiti through the UN Stabilisation Force in Haiti (MINUSTAH).

The CARICOM Chairman also welcomed the opening of the Takutu River Bridge connecting Guyana to Brazil saying he had no doubt that this “physical link will expand economic benefits to the CARICOM region.

“This bridge will help make available a trade route which will further the efforts of the CARICOM Single Market and Economy (CSME) which is intended to provide the springboard to facilitate CARICOM’s integration into the hemispheric and global environment through more competitive production, thereby enhancing our trade relations.

“In this regard, some member states have started to formalize their trading relationships with Brazil. Guyana has signed a partial scope agreement. St. Kitts and Nevis has expressed interest in becoming part of that agreement,” Skerrit added.

The Dominican prime minister said that the recent global financial and economic crisis has negatively impacted small vulnerable economies, such as those of CARICOM and that the various fiscal measures taken by regional governments to ensure sustainable growth were daily examples of the extent to which the Caribbean has been affected.

“It is only through these efforts that we can ensure that the concerns of small vulnerable economies like ours will be taken on board during the policy making discussions at such institutions.”

Climate change matters were also be discussed during the summit here.