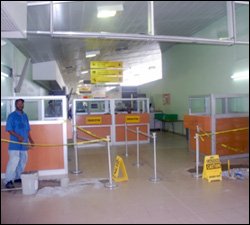 “Our objective is to improve the departure and better screening facilities,” said the SCASPA CEO.

Mr. Crossman used the opportunity to apologise to users of the departure area for the inconvenienced that is being caused during the renovation period.

Last December Prime Minister Hon. Dr. Denzil L. Douglas, who at the time was Minister of Tourism visited and toured the airport following reports of “bottlenecks” from departing passengers.

The policies of the governing St. Kitts-Nevis Labour Party Administration under the leadership of Prime Minister has resulted in St. Kitts and Nevis becoming a well sought after tourism destination in the Caribbean and have attracted several international flights to the Federation.