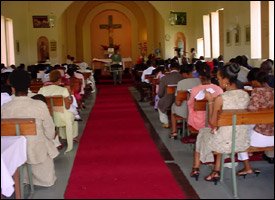 The Half Way Tree Methodist Church is the venue for a Service of Thanksgiving by the St. Kitts – Nevis Labour Party to mark the fourth anniversary of its re-election in October 2004.

The Labour Party’s Chief Executive Officer and General Secretary, Ms. Wanda Connor said the Service will be held this coming Sunday 26th October 2008 at 11:00 A.M and will be conducted by Methodist Minister, the Rev. Joyce Rohan.

National Political Leader of the St. Kitts-Nevis Labour Party, Prime Minister Hon. Dr. Denzil L. Douglas will deliver an Expression of Thanks, prior to the Sermon by Rev. Rohan.

The ruling St. Kitts – Nevis Labour Party was returned to office for a third consecutive term on October 24th 2004, when it won seven of the eight seats on St. Kitts in the 16-member Federal Assembly. The Concerned Citizens Movement has two seats and the Nevis Reformation Party and the People’s Action Movement with one seat each.