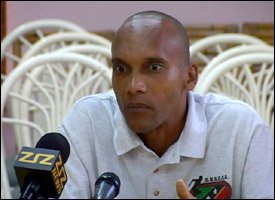 Sports administrators and development consultants Donald Quarrie and Howard Aris of Jamaica visited St. Kitts and Nevis from October 16 to 18, and consulted with colleagues, officials, coaches and athletes involved in track and field.

First Vice President of the St. Kitts and Nevis Amateur Athletic Association (SKNAAA), Glen Jeffers described the sessions as “very informative and intriguing.” He quoted the Minister of State responsible for Sports Hon. Richard Skerritt in explaining that this consultation process was a part of the overall review of the Government’s sports policy.

“The discussions with Don (Quarrie) and Howard were exciting for me,” Jeffers said, adding that he was pleased that track and field was the primary focus of the three day visit. “Bringing Howard and Don here solidifies [the] interest in moving sports forward. Thanks for this opportunity.”

The topics were broad and SKNAAA members and their colleagues from the Nevis Amateur Athletic Association listened intently, seeking to adopt best practices.

One area of interest mentioned by the first vice president was the ability to keep athletes at home rather than having them leave to train overseas.

“We’ve been encountering some real challenges with that approach. We are not going to change it wholeheartedly but we really need to have more athletes preparing at home,” Mr. Jeffers said.

Olympic champion and 100 meter world record holder Usain Bolt of Jamaica benefited from home training, which was specialized to take back problems into account. The construction of the Silver Jubilee Athletic Stadium at Bird Rock has strengthened the resolve of the SKNAAA to have athletes to train locally.

Jeffers added that his association was pleased with its productive relationship with the Government which fulfilled its pledge to build the Class 2 athletics facility and review existing policies. Citing the longstanding relationship with the Jamaica Amateur Athletic Association which stretches back to the early years of training for Kittitian sprint champion Kim Collins in the 1990s, First Vice President Jeffers stated that he was eager to continue the collaboration with the JAAA in critical areas.