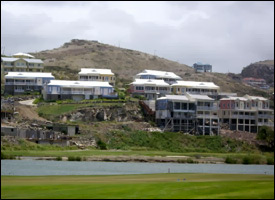 The first phase of TDC’s Sunrise Villas Development has been sold out.

According to the company’s annual report for 2007, TDC Real Estate and Construction Company Ltd completed the sales and construction of several villas at the upscale Sunrise Villas development overlooking the golf course at Frigate Bay. Prices ranged from US$325,000.

“The first phase has been completely sold out and sales in the second phase have been brisk so far,” said the report.

It said also that sales in the middle-income housing project being developed by Conaree Estates Ltd have not met management’s expectations as only four of the twenty one single family homes have been sold so far.

“However, aggressive sales efforts are being made to generate more activity in this development,” said TDC.

It also disclosed that the Cable Bay Hotel Development Company has commenced the construction of the first phase of the Ocean’s Edge project at Frigate Bay.  This phase comprises fifteen buildings housing thirty condominiums units.