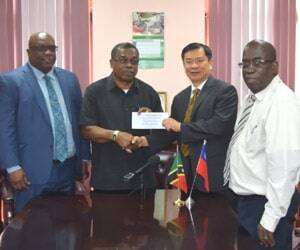 Handing Over Of Check From Taiwan

The Taiwan government has donated EC $620,000 to the Ministry of Public Infrastructure to help bring relief to consumers impacted by the ongoing drought conditions.

During a brief ceremony at Government Headquarters on Friday, April 29, the Honourable Ian Patches Liburd, Minister of Public Infrastructure, thanked His Excellency George Gow Wei Chiou, Resident Ambassador of Taiwan to St. Kitts and Nevis, for the sterling contribution. The Federal Government provided over EC $600,000 to the Water Department to ensure that the water situation in the areas of Mansion ““ Phillips ““ Molineux would be significantly improved.

“Having heard of the water issue Ambassador George Chiou is here with us to subsidize this cost for us on behalf of the Government of Taiwan,” he said.

Prime Minister Dr. the Honourable Timothy Harris expressed thanks to Minister Liburd for “the proactive way in which the ministry has moved to bring relief to the long-standing” water problem.

“Last year, I am advised that we had a shortfall in rainfall of some 55 percent compared to the average annual rainfall by any standard that has been a significant reduction in rainfall,” said Dr. Harris, while noting that rainfall has been the principle source for the Federation to have water.

Prime Minister Harris congratulated citizens and residents for the efforts they have made to reduce water wastage.

“We must continue however to conserve water and to use water more responsibly all of the time and not just in drought situation,” he said. “The old adage willful waste makes woeful want is something that we need not to practice as it relates in particular to water. So let us conserve every day of the year and be responsible in our use.”

Dr. Harris noted that the Government of St. Kitts and Nevis is committed to making long term investments in relation to the water situation especially in the areas outlined above.

“We are investing for the long term and the significant investment we are making in having the water as it were, pumped from Mansion all the way up to Phillips and Lodge to ensure that all of the communities are equitably treated with respect to this critical resource,” said the prime minister.

Ambassador Chiou said that he is pleased with the Federal Government for taking the initiative to promote and to increase the provision of water to citizens and residents. He stated that his Government is committed to continued cooperation that would redound to the benefit of all.

In early April, Prime Minister Harris along with Minister Liburd and other officials of the Water Department journeyed to Mansion for the groundbreaking for the Mansion ““ Phillips ““ MolMolineux Water Supply Improvement Project.