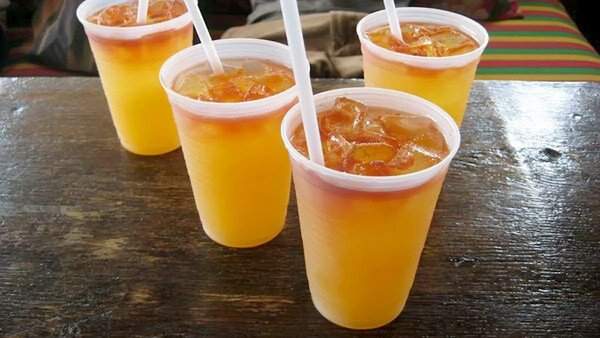 I can’t begin to guess how many times I have been asked for the famous…or infamous Sunshine’s Killer Bee Drink Recipe.  While this is not exact, it is damn close…after a few you won’t notice anyway :)  It is not a Nevis vacation without one of these.

Assemblage Of The Killer Bee


Mix ahead of time:
1/3 rum mixture (above)
1/3 Passion Fruit juice (above)
1/3 club soda
honey to taste
lemon juice Fresh squeezed of course
(I personally suggest having all of the ingredients above kept COLD)

pour over a glass 1/3 full of ice cubes
add bitters to taste (Angostura bitters).
a light grating  of fresh nutmeg to taste


Rum is a liquor made by fermenting then distilling sugarcane molasses or sugarcane juice. The distillate, a clear liquid, is usually aged in oak barrels. Most rums are produced in Caribbean and American countries, but also in other sugar producing countries, such as the Philippines and India.

Rums are produced in various grades. Light rums are commonly used in cocktails, whereas “golden” and “dark” rums were typically consumed straight or neat, iced (“on the rocks”), or used for cooking, but are now commonly consumed with mixers. Premium rums are made to be consumed either straight or iced.

Rum plays a part in the culture of most islands of the West Indies as well as the Maritime provinces and Newfoundland, in Canada. The beverage has famous associations with the Royal Navy (where it was mixed with water or beer to make grog) and piracy (where it was consumed as bumbo).

Ode to Rum
“The horse and mule live thirty years,
And nothing know of wine and beers.
The goat and sheep at thirty die
And never taste of scotch or rye,
The cow drinks water by the ton,
And at eighteen is nearly done.
The dog at fifteen cashes in
Without the aid of rum or gin,
The cat in milk and water soaks,
And then in twelve short years it croaks,
The modest, sober, bone dry hen
Lays eggs for nogs, then dies at ten.
All animals are strictly dry
They sinless live and swiftly die
But sinful, ginful, rum-soaked men
Survive for three score years and ten.”