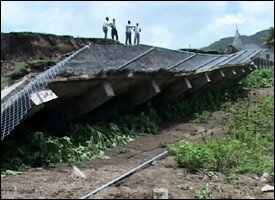 Officials from the Public Works Department and the Ministry of Sports have promised residents of St. Peter’s that the recent setback at the community sporting complex will be rectified in a timely and efficient manner.

On Tuesday, Minister of State for Sports, Honourable Richard Skerritt, and support staff, joined representatives from Public Works and the Parliamentary Representative for the area, Honourable Cedric Liburd, in assessing the damage done to part of the retaining wall which collapsed from the heavy rainfall experienced over the past several days.

Public Works Engineer Kevin Williams told SKNIS why a section of the wall collapsed. He explained. “We had columns every eight feet apart. Some big columns that are able to withstand normal situations. “¦ Due to the excess amount of rain and the field being water logged, the excess weight caused the wall to break.”

Minister Skerritt described the damage as “unfortunate” and explained that the incident was caused by the culmination of a series of unusual circumstances.

“This is a natural disaster,” he noted adding that the fence at the front of the facility is not complete. This allowed an excessive amount of water from the street to run onto the playing surface instead of being diverted away from the facility.

“The engineers are here and they are going to evaluate the extent of the damage and what will be required to put it back together in an even stronger way. This is a set back, there is no question about this. I feel really, really sad,” he stated.

Minister Skerritt stressed that the Government has an excellent reputation in recovering from natural disasters and he was confident that the same will hold true in this instance.

The playing field was expanded by 33 percent of the original size to accommodate hardball cricket matches, which can be staged at an international level. Other improvements under the phased upgrade project included the construction of a pavilion complete with bar, change rooms and commentary booth. Additions were also done to the netball court and the entire facility is to be fenced and enhanced lighting installed.

Project Manager Jolin Davis of Public Works said that the damaged section will be reinforced and gave assurances to Parliamentary Representative Liburd that the repair work will commence as quickly as possible.

Minister Liburd asked members of the sporting fraternity in St. Peter’s to be patient and indicated that the day when the facility will be officially handed over to them is drawing nigh.

The upgrade project started several years ago as a self-help initiative led by Parliamentary Representative, Honourable Cedric Liburd and constituents, with support from various companies including LIME and The Cable.

The Government recently took over the project after securing funding from the Republic of China (Taiwan).