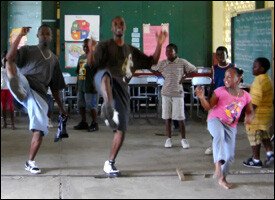 Learning about the history of the masquerade, the significance of the colourful costumes, and the mesmerizing steps of the folklore troupe are all a part of the lessons children ages 7 to 12 learn at the new St. Kitts Folklore Academy.

Founded on March 14, 2009 by Shashi Wigley, the class meets every Saturday from 10:00 a.m. to 12:00 p.m. at the Tucker Clarke Primary School. The young man was recognized last week at the drumming concert Heart Beat, as the newest partner of the Department of Culture in continuing efforts to promote the rich culture of the twin-island Federation. He appeared on this week’s edition of SKNIS Perspectives and revealed his motivation for the creation of the academy.

“I’m the kind of person who when I am doing something, I want to know why I am doing it and where it came from,” Wigley said. I figured “it would be a good thing to have an organized place where youths and adults can [go] to feel comfortable and learn the aspects and significance of the dances in a private place.”

When the young man discovered there were occasional workshops, but nothing executed on a regular basis he resolved “you know what, I’m going to do it.”

Much of the information and techniques shared with students are tapped from reliable sources. Veteran masqueraders Calvin Powell and Dennis Weekes assist with dance tutoring duties while research about the traditions of the folklore group is done at the St. Christopher Heritage Society.

The students “have something that can occupy their time and do something constructive,” stated Mr. Wigley. “It also helps to develop their mind at a tender age to start thinking like an entrepreneur in ways to generate income like selling art and craft items.”

He added that participants may go on to perform at concerts or even organize such when they get older. “There are so many things that can be pushed in our little island so I really think they will benefit greatly,” the academy founder stressed.

Intangibles such as working as a team, dedication, discipline, respect for others and hard work are also shared with participants. Persons seeking additional information including registration procedures can contact Shashi Wigley at 668-6600. There is a registration fee of $15.00 and classes are $30.00 per month. Wigley noted that the experiences – which also include field trips to historical sites – and the education gained are priceless.

That message has seemingly resonated with some parents of students from the Tucker Clarke, Maurice Hillier and Beach Allen Primary School. Mr. Wigley disclosed that his fellow tutors and students will be on the road as a group for the 2009 Carnival season in December.