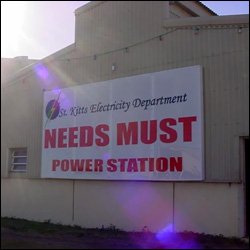 Flooding as a result of a rupture in one of the cooling system of a generator at the Needsmust Power Plant caused an island-wide blackout at two minutes to eight Wednesday morning.

A statement from the Electricity Department said the sudden surge of water affected KV12 #1 alternator cable, causing a three phase over current fault which not only shorted the alternator causing the breaker to open, but was strong enough to destabilize the system and caused a blackout.

“After the source of the problem was successfully isolated, the restoration began at 8:30 with the closure of the Bayfords and Canada feeders. However at 8.50 the system again became unstable and forced the opening of the aforementioned feeders to stabilise it,” said the statement.

The Department has apologised to consumers for the disruption in the supply of electricity.

Time to buy a backup generator!