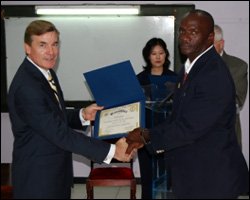 Three members of the Royal St. Christopher and Nevis Police Force were among 25 regional counterparts are now better prepared to prevent terrorist and other attacks against “˜soft’ targets such as major hotels, sports venues or religious and cultural sites.

According to the Barbados-based U.S. Embassy, the course, which was conducted at the Regional Police Training Center in Barbados, is a blueprint for similar training within the region and eventually worldwide and was facilitated by the Regional Security Office at the United States Embassy, Bridgetown.

It was designed to assist regional law enforcement agencies in preventing armed attacks or incendiary or explosive attacks against events which draw large crowds.

The participants were taught how to draw up comprehensive security plans and to draft responses to established threats.

Speaking at the graduation ceremony ChargÃ© d’Affaires at the U.S. Embassy Dr. Brent Hardt noted that within the past three years the United States had provided over USD 8 million to the security sector of the region, encompassing training, equipment, and other programs.

“We remain fully engaged and committed as the key security partner for the Caribbean region, and we intend to be there as partners for years to come,” he said.

The U.S. envoy noted that newly-inaugurated President, the Hon. Barack Obama had stated his intention to work with other nations to strengthen their capacity to combat terrorism.  He added that recent experiences had clearly showed that “˜soft’ targets such as hotels, cruise ships and areas where high numbers of tourists gather could prove attractive targets for terrorists.

“As we have seen in Bali, Egypt and, most recently, in Mumbai, such soft targets are inviting for terrorists seeking international attention.  Only by working together can nations hope to deter such heinous attacks,” he added.

Law enforcement officials from Barbados, Dominica, Grenada, St. Vincent and the Grenadines and St. Lucia took part in the training.