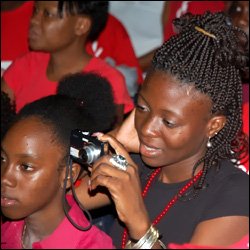 An appeal to young people in St. Kitts and Nevis to become involved in the electoral process.

“The youth must have a voice in the public debate about the direction of the country,” said Condor, who pointed out that prior to 1952, the social, political, and economic decisions were made for the masses by the planter class.

“Before the Labour Party came on the political scene you had the Great Houses or the Plantation Houses and the trash houses. Look what successive Labour Governments have done in revolutionizing housing in this country. You now have low-income houses, middle-income houses, NHC homes, SSMC homes, under this Labour Government,” said Condo, Leader of Government Business in the St. Kitts and Nevis National Assembly.

Condor, who is seeking a six-term Parliamentary Representative for West Basseterre said the construction of over 3,000 homes financed through several programmes under the Labour Party Administration of Prime Minister Hon. Dr. Denzil L. Douglas in the past 14 years, is unprecedented in the Caribbean.

Government has also been trumpeting its record in the provision of educational loans to study at colleges and universities overseas to 1,676 students worth over EC$84 million in 14 years, compared to loans to 171 students by the former People’s Action Movement totaling one million dollars during their 15 years in office from 1980 to 1995.

“The issues in the upcoming general election are about your future and the future of your children,” said Mr. Condor, reminding the youths that their grandparents have fought for parliamentary representation and their successes and achievements must not be squandered.

“The youths of this country must build on this foundation and the legacy and to take it forward so that it can be passed on in an improved and enhanced manner to future generations. If we fail to do that history will not be unkind to us,” said the Deputy Prime Minister who reiterated that the youth must become involved in the public debate on the issues in the next elections.

“This is serious times. Young people, you have been empowered and you have to get involved in your destiny,” said Mr. Condor.