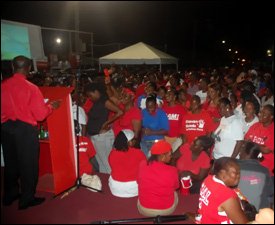 Deputy Prime Minister Hon. Sam Condor says the constitutional nightmares that confront St. Kitts and Nevis are the making of the People’s Action Movement (PAM) Kennedy Simmonds administration when it took the Federation into Independence in 1983.

Speaking at a public meeting on Thursday in the town of Sandy Point, Deputy Prime Minister Condor singled out sections of the constitution that bars nationals from being elected or appointed to the National Assembly if they hold dual citizenship, gives the island of Nevis the right to secede, gives St. Kitts an equal number of seats in the National Assembly and makes it mandatory that Nevis must have one-third of the seats in the lawmaking body.

Two candidates for the PAM party in the next general elections, the Political Leader Mr. Lindsay Grant and the lone Parliamentary Representative, Hon. Shawn Richards have admitted to be naturalized citizens of the United States and are ineligible to be nominated to contest the next general elections. In recent weeks, both have said they have travelled to the United States Embassy in Barbados and have renounced their American citizenship.

Condor, the Leader of Government Business in the National Assembly said the Labour Party during the Constitutional Talks in London in 1982 opposed the inclusion of several clauses in the Independence Constitution.

The PAM government delegation, led by then Premier Dr. Kennedy Simmonds, placed a clause in the Constitution that states only persons who had a parent born in St. Kitts and Nevis could seek parliamentary office or sit in the National Assembly.

“The Labour Party has always opened its arms to the involvement of Caribbean nationals in the political process in St. Kitts and Nevis. (Former Premier, Deputy Premier and Minister of Tourism) C.A. Paul Southwell came from Dominica and (former Minister of Health and Education) (Fitzroy Bryant came from Antigua. They paid their dues and made their contribution and were allowed to serve in this country,” said Mr. Condor, who also pointed out that neither of them had a parent who was born in St. Kitts and Nevis.

The Constitution states in Section 28.- (1) A person shall not be qualified to be elected or appointed as a member if he-
a) is, by virtue of his own act, under any acknowledgement of allegiance, obedience or adherence to a foreign power or state;

“It is their Party that also put the dual nationality clause in the Constitution at the Independence Constitutional Talks in London in 1983. We as a Party were never for that. We had the biggest demonstration ever seen in St Kitts in 1981 when we marched to the Fort Thomas Hotel against the present Constitution with all these proposals,” said Condor.

The issue of dual citizenship became a public issue when the Democrat ““ the official mouthpiece of the People’s Action Movement sought to mislead the public with the false allegation that Prime Minister Hon. Dr. Denzil L. Douglas was a citizen of the United States.

“PAM then took Hon. Dwyer Astaphan to court to say that he had dual citizenship and should not be in Parliament,” noted Condor.

After rumours, the political Leader of the PAM, Mr. Lindsay Grant was caught in a web of deception when he first admitted publicly that his lone Parliamentarian, Hon. Shawn K. Richards was a naturalized United States citizen. Weeks later he himself admitted that he too was a naturalized U.S. citizen.

Mr. Grant also threatened to go to court last week to challenge the amendment to the National Elections Act which which calls for the presentation of evidence that the other nationality has been renounced. No court documents were filed.

Mr. Condor said the PAM Government of Dr. Kennedy Simmonds also opposed a proposal of then Leader of the Opposition, Sir Lee Moore to include Integrity in Public Life legislation in the Independence Constitution.

He also told the massive crowd that the Labour Party also opposed the granting of Section 113 in the Constitution that gives Nevis the right to secede from the twin-island Federation.

“We also opposed the inclusion in the Constitution, the right of Nevis to have one-third of the seats in Parliament at all times. We were against that and that is one of the problems with the boundaries,” said Deputy Prime Minister Condor, who said many of the problems in this country are the making of the past People’s Action Movement administration.

“PAM creates confusion, Labour makes peace. PAM believes in poverty and retrogression, Labour believes in empowerment, prosperity and progression. The evidence is there,” reiterated Condor, who called on the electorate to judge the record of both parties in government.

He used the opportunity to commend the Labour Party’s new candidate, Cuban-trained physician, Dr. Norgen Wilson for the leadership given to the neighbouring communities as the District Medical Officer and to community of Half Way Tree/Sandy Point and Fig Free over the past months.

“There is no comparison. Dr. Norgen Wilson has already provided to this Constituency and this country, leadership that generations yet unborn will have reason to say, this was our finest hour,” said Mr. Condor.