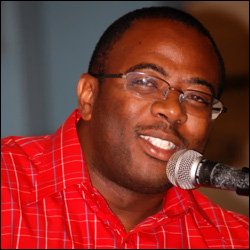 The incumbent St. Kitts-Nevis Labour Party Government is being praised for the continued development of Sandy Point and Fig Tree although the party does not represent that constituency in the National Assembly.

Medical practitioner, Dr. Norgen Wilson also said that the community lacks parliamentary leadership from the present holder who constantly claims that his “hands are tied.”

The Cuban-trained doctor, who is seeking election to the National Assembly on the Labour Party ticket, accused the People’s Action Movement (PAM) which was in government from February 1980 to July 1995 of allowing the Pogson Hospital to rot.

“It took a Labour Party Government to replace it with the Pogson Medical Centre, a state-of-the-art brand new medical facility with new and additional services for the people of Sandy Point and the surrounding areas,” said Dr. Wilson at a Cleverly Hill meeting on Thursday. Thje new facility also houses the Sandy Point Health Centre.

He pointed to the many areas ““ roads, homes, student loans, scholarships and expanded facility at the Sandy Point High School and the Primary School of development and identified plans for further improvement.

“When a community elects a parliamentary representative, that community expects that person to deliver and that is why I say to you, I see something wrong with this present leadership of Sandy Point. The leadership of the Hon. Shawn Richards has not been delivering and we have heard him time and time again that his hands are tied.”

“When I drive down Station Street and I see the road needs to fix, I call the Minister responsible for roads, Hon. Dr. Asim Martin and I keep calling him. When I see him everywhere, I remind him that the road needs to be fixed. His officials say they are going to patch it. I said no, I prefer for it to be completely resurfaced and so he has now advised me that come Monday morning, the resurfacing of Station Street, Pedro Street and Fahie Street are going to start because Dr. Wilson is working for the people of Sandy Point,” he said.

Dr. Wilson announced he has been instrumental in securing land for residential and commercial purposes for 70 persons.

“Government has nothing to do with it, because I am working for the people of this community. I know that government will have to play a part, but as a representative I have to ensure that the job gets done and if the government says no money is immediately available, I have found an alternative,” he said.

Dr. Wilson, who is also a part-time lecturer at the Nursing Division of the Clarence Fitzroy Bryant College (CFBC), said the residents of Fig Tree have indicated the need for a Community Centre and restoration of the pier at Pump Bay.

“I have asked for a Day Care for the children of the residents to be included in the plan for the Community Centre. You have to be visionary and that is what the PAM representative lacks,” said Dr. Wilson, alleging that the Hon. Shawn Richards has surrounded himself with himself with persons who have presided over the demise of football in Sandy Point.

“No football has been played in Sandy Point for the last 10 years and the people of Sandy Point know who are responsible for the demise of football. It is the same set of people who organised a campaign to disrupt the flow of vehicular and pedestrian traffic in St. Kitts and mounted the campaign in New York where leaflets where handed out telling people not to visit St. Kitts,” said Dr. Wilson.

“Whether you are a supporter of the Labour Party or the PAM party, if you are working in the tourism industry, it is a campaign by PAM that affects your livelihood to provide food for you and your family, the campaign by PAM affects your ability to send your children to school and to university. This country depends on tourism and its related services in the new economy and what PAM is doing is destroying the economic lifeblood of this country,” Dr. Wilson said.