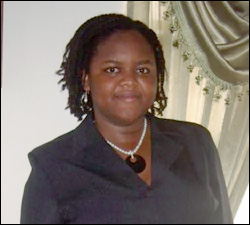 The 46th Annual National convention of the People’s Action Movement held on Sunday 3rd April contained an innovative feature that observers praised as forward looking and progressive as the party develops its long range strategy toward unseating Labour.

In place of the traditional guest speaker, this year the convention was addresses by seven youth under 30 who expounded on various topics of urgent local interest. The youth presenters were universally acclaimed for their eloquent, timely and focused presentations and received enthusiastic support from an appreciative audience.

One topic that was addressed was land, which is an emotive issue on St. Kitts and has been a pressing issue during the last three election campaigns. In a presentation entitled Land Use, Distribution and Empowerment, Ms. Deniece Alleyne, Lawyer and Editor of the Democrat Newspaper, gave a historical perspective on the struggle for land before sharply criticizing the way in which this Labour government has disposed of thousands of acres of prime government land.

“In the first case, according to the IMF 4,500 acres are mortgaged as collateral for debt that was foolishly incurred by short-sighted and loss making expenditure for the SSMC,” she opined.

In addition Ms. Alleyne excoriated the government for its politicization of the land issue and the way in which its land policy has harmed the economy. “With its housing policy the government spent millions of dollars without any hope of returns because too many of the recipients cannot afford the mortgages. However, it did not care, because the only return that Labour wanted was the vote,” she declared.

She continued in describing the current situation “you the ridiculous situation of hundreds of acres of the best land as golf courses, far more than as farm land,” the asked;  “how can this empower Kittitians, and how many of us?”

Ms. Alleyne ended her presentation by describing how a government of the People’s Action Movement would empower ordinary through land ownership and through this ad significant value to the economy. “With the sugar lands available under a PAM government 1500 people would have had access to ownership of about 3000 acres of land. Most would have sold it and while a few would have migrated most would have used that money to build homes and make other substantial purchases. There would have been millions of dollars released into the economy to provide tax revenue and to stimulate the creation of more businesses; all without the government having to borrow a penny.”

This was just the first of seven cogent presentations that indicate that the future of the People’s Action Movement is secure in the hands of its youth arm.