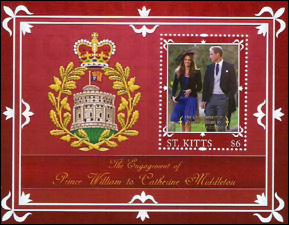 The General Post Office in St. Kitts will honour the Royal Wedding with the release of stamps celebrating the Engagement of Prince William and Kate Middleton.

According to the General Post Office, the Souvenir Sheets and Sheetlets to mark this historic occasion would be released for sale on Tuesday 26th April 2011 at the Philatelic Bureau, Pelican Mall, ahead of the April 29th wedding.

StampNews.com reported that New Zealand Post recalled its royal wedding stamp packets because they said William was born May 21, 1982, rather than the actual date, June 21, 1982. A stamp dealer advised people not to turn the items in, however, because they could be valuable.

Prince William is no stranger to philately. Stamps were also issued to honor his birth and his 21st birthday.

New issues can be obtained from a variety of stamp dealers and from the postal services of the issuing countries.