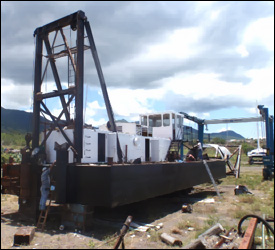 The Galantry Dredge Under Construction
Photo By Erasmus Williams

A young local businessman is expressing confidence in the St. Kitts and Nevis economy pointing out that with the major projects and job opportunities in St. Kitts, nationals should position themselves to take advantage of present and upcoming projects.

St. Kitts Marine Works Director, Mr.  Regiwell Francis made the statement as he announced the assembling of an 18″ Dredge Master dredge.

“The Galantry” ““ named after his son is to be used on the marina at the Christophe Harbour project on the South East Peninsula.

“SKMW has a 12-inch cutter head dredge currently dredging the marina for Christophe Harbour and we will be introducing our new to St. Kitts 18-inch dredge to the project as a second dredge to speed up the work,” said Mr. Francis.

He disclosed that the dredge will move more than twice the amount of material of the present dredge and with both dredges pumping “we are hoping to complete the job on schedule.”

“SKMW see major projects and job opportunities in St. Kitts and seeks to position its self to take advantage of present and upcoming projects, including Christophe Harbour Marina construction and phase two of the dredging which would be to dredge the great salt pond,” said Francis.

He said SKMW realizes to get jobs one needs to have the equipment to do them.