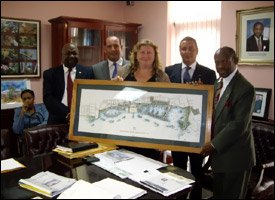 A US$3 billion development-oriented master plan for the development of the coastal section of the city of Basseterre was presented to Cabinet on Monday.

According to Minister of State for Information, Sen. the Hon. Nigel Carty, Cabinet received an update from an international development group, regarding the group’s investment plan to expand and develop the coastal section of the city of Basseterre.

He said the United Kingdom-based group has been working alongside the St. Christopher Air and Seaports Authority (SCASPA) for the past nine months to develop a development-oriented master plan.

The plan unveiled envisages expanded sea port facilities, the construction of a second cruise pier, a marina, beach front enhancement, the extension of the railway as a tramway into the downtown area, the expansion of the ferry terminal, the development of a heritage square and the construction of  a quarter mile of development space for shops, restaurants, bars and facilities.

The investment is projected to be on the order of US$3 billion.

“This project juxtaposed with the development taking place at Christophe Harbour on the South East Peninsula is a critical component of the strategy of the St. Kitts and Nevis Labour Government to transform the economy of twin-island Federation into a robust, high-end tourist destination over the next 5 to 10 years, for the full empowerment of the nation’s people.