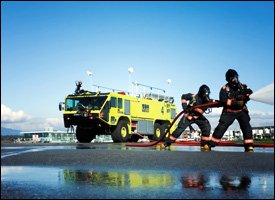 A table top exercise to test the management and operational aspects of the Airport Emergency Plan at the Robert Llewellyn Bradshaw International Airport last Thursday.

Head of Corporate Affairs and Public Relations, Mrs. Delcia Bradley-King said the purpose of the exercise was to focus on the function and role of the Emergency Operations Centre, the unit responsible for centralised coordination and direction.

“The scenario used was a written bomb threat message.  When the table top exercise began the Centre had already been notified about the threat and the Airport was in shutdown mode.  As would be the case in a real situation, the Emergency Operations Centre was manned by representatives of SCASPA as well as other agencies including Fire and Rescue Services, NEMA, Royal St. Christopher and Nevis Police Force and the Defence Force,” said SCASPA in a news release.

The activity was controlled by Director of the Disaster Management Department in Nevis, Mr. Lester Blackett.

The aspects of the Plan that were tested included the rate at which information was received; the accuracy, completeness and clarity of messages; the correct channeling of information; effective coordination of units; and the proper implementation of decisions.

The table top exercise also involved a press briefing at which a panel provided members of the media and public with an account of the situation at the Airport, and responded to questions posed by journalists.

“Participants and observers felt that the activity was extremely useful as it provided an opportunity for agencies to perform their designated roles, and to identify shortcomings that need to be addressed.  Many positive outcomes were also highlighted, and SCASPA received commendation for executing this table top exercise in a smooth manner,” the release said.

The International Civil Aviation Organisation (ICAO) requires the regular testing of Airport Emergency Plans through the conduct of table top and full-scale exercises.  A full-scale, live exercise is being planned for later this year, and the public will be informed as all persons on the Airport during that time will be involved.

The St. Christopher Air and Seaports Authority is ensuring