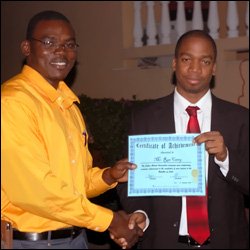 Two medical doctors were among four nationals who graduated this year from universities in Cuba.

Three of the four were presented with Certificates of Achievement at the 5th Graduation Ceremony at the Embassy of Cuba, organised by the St.Kitts and Nevis Cuban Alumni Association.

President of the Association, Dr. Dwain Archibald in congratulating medical practitioners, Dr. Sakhara Assegai (who was absent), Dr. Ron Carty of Saddlers Village, St. Kitts and Electrical Engineer, Gaston Dixon of  St. Paul’s, St. Kitts and Accountant, Shara Maynard of Nevis, noted it is the end of a laborious journey and that they were now launching out in the professional world.

“You must be proud as indeed you should be. You have managed to overcome all of the obstacles and have shown that you possess the ability, the strength, the will, the persistence and all else that was necessary for you to arrive at this stage. However, I must caution you, that this is not the here all or the end all of your career. In fact, you are just beginning. You have now entered the phase where you will put your knowledge into effect,” said Dr. Archibald.

In urging the new Cuban university graduates to share their knowledge with the rest of the community, Dr. Archibald called on them to assist in the development of St. Kitts and Nevis.

Dr. Archibald noted that in this world and especially in a small community like St. Kitts and Nevis, each person has a specific role to perform.

“University assists in defining your roles. Your role in life is likened to a game of chess where the moves by each piece on the chess board contribute to the wining of the game. In the same way everyone has a unique task and a requirement which once executed successfully, in proper coordination with your colleagues, results in strategic and beneficial advancement of the society,” he said to the graduates, their parents, members of the St. Kitts and Nevis Cuban Alumni Association and official on the Cuban embassy.

Dr. Archibald pointed out that graduates of Cuban universities have had the pleasure of attending tertiary-level institutions throughout the Republic of Cuba and moreover the opportunity to learn a second language.

“Thus we expect that some of the cultural barriers between our country and the Republic of Cuba would have been broken down. This is the start of our mission. Our graduates are now additions to the local Cuban Alumni Association. This organisation exits as a link between the People of the Federation of St. Kitts and Nevis and those of the Republic of Cuba,” said Dr. Archibald, who added that the association also acts as a buffer in better understanding the differences in beliefs, culture, lifestyles and facilitates greater and better understanding of each other.

“It also acts as a support group for the new graduates who may need assistance in getting over the initial hurdles in this new state of our lives,” said Dr. Archibald.

He took the opportunity to express commendations and deep admiration of the graduates. “I also commend the Government and the People of the Republic of Cuba, without whom, the attainment of our goals would not have been possible. For a number of years the Republic of Cuba has provided the means for interested individuals to work towards the attainment of an education which assisted them in achieving their career goals.”

“The Government of St. Kitts and Nevis too, must be highly commended for providing us with the opportunity to improve ourselves, which in turn would be an improvement in the human resources of our country. To the parents and guardians, I say that you should justly be proud when you think of the sacrifices that you have made to bring your children to this stage when they have achieved and done well, they can only be proud of your efforts. We share your joy his evening,” concluded Dr. Archibald.

The theme of the Graduation Ceremony was “Shaping our Society through Education and Discipline.” The feature address was delivered by Anglican priest, Father Alric Francis, who was introduced by Carolyn Brownbill. Dr. Carronette gave the opening prayer and the welcome remarks by Dr. Giovanna Mattenet, who also chaired the ceremony. Engineer La Reine gave the Vote of Thanks. Resident Cuban Ambassador, Her Excellency Ana Maria Gonzalez also delivered remarks.