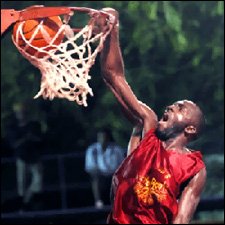 If their was any doubt as to the best team in the St. Kitts Amateur Basketball Association it was totally erased this past Sunday at Basketball City

The S/L Horsford Ghetto Roots proved that they were undoubtedly SKABA’s best and most exciting team as  they embaraassed the number-one seeded Rams Hitters as the playoffs of the 2009 LIME Premier Division continued.
Ghetto Roots had a convincing 93-81 victory which could  have been even more of a disaster for Hitters had it not been for some  bad and some may say highly questionable referee calls against the Ghetto Roots.

The Defending champs Hitters could neither stop or contain Fyfeild as he scored and exciting 19 points, which included an spectacular dunk that turned  brought Basketball City upside to its feet.

“By-By” was ably assisted by  Rymal “Bally”  Browne  who was double or triple teamed every time he touched the ball and was still able to scorch Hitters with 15 points, three rebounds and three steals.

This is the second straight victory for Ghetto Roots against the defending champions, Hitters.

The Hitters seemed to be no match for Ghetto Roots who were without college based center William Natta. Natta is back at Bellevue University in the United States. Despite being without the big and powerful Natta Ghetto Roota still dominated Hitters. Ghetto Roots was up by as much as 20 points during the game.

There is no doubt that Hitters is indeed a great team, however, the Ghetto Roots are now the greatest.

Ghetto Roots have now sealed their spot in the finals of the LIME Premier Division.

Ghetto Roots is the only undefeated team in the Premier Division playoffs.

“I am very proud of the success thus far of the team said former Ghetto Roots Manager Glenroy Blanchette. There is no doubt that the team is an extremely talented one and they represent a proud community rich in sports history. The richness of this sports heritage must be a motivating factor for their success and I am confident that they will bring a national sports championship to newtown this year ,”  the former Manager continued.

Ghetto Roots made it to the SKABA finals in 2008 . Ghetto Roots Manager Wallis Wilkin made two crucial moves during the off season in the acquisitions of national player Levi Fyfeild and head Coach Dr. Garfeild Alexander . The move has transformed the team from  a good team to a great team.

The Ghetto Roots 2nd team the Rootsie is also in the mix in the “A” Division playoffs.

Ghetto Roots has two games remaining I the playoffs against Chappurtin and St.Pauls both of whom they have defeated during the regular season.