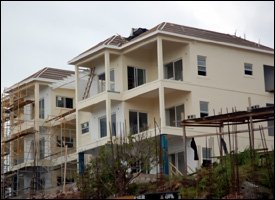 The Prime Minister of St. Kitts and Nevis Hon. Dr. Denzil L. Douglas said the economy of the twin-island Federation has been spared the brunt of the fallout from the international economic crisis.

He said his Labour Party Administration acted swiftly and definitively to combat the impact of the global recession on the local economy.

“All the evidence suggests that, notwithstanding some reduction in economic activity and some layoffs, to date we have been spared the brunt of the global economic recession. We know that the sector that is most vulnerable to the economic fallout of the global crisis is the tourism sector. Hence, we quickly approved packages of concessions for small hoteliers and for stand-alone restaurants that permit them to import food and wine and some items of equipment and furniture, free of duty,” Prime Minister Douglas told the opening ceremony of the 12th National Consultation on the Economy.

He said his Government also extended concessions to small start-up businesses, and many entrepreneurs, including young people, continue to benefit week after week from this important initiative, to the benefit of the economy as a whole.

“We have been monitoring the economy with a view to intervening wherever and whenever necessary to ensure that we remain on track to the attainment of our goal of enhanced economic activity, job creation, and increased income,” said Dr. Douglas.

He said Government has also taken a keen interest in the major investment projects that contribute to growth.

“We believe that our package of assistance and concessions have helped tremendously in facilitating the continuation of work or the advancement of plans in respect of major investments at Christophe Harbour, Cockleshell Bay, Ocean’s Edge Resort, Port Zante, Silver Reef and the Marriott development at the site of the Angelus Hotel,” said the Prime Minister.

He said government has recognised that construction is a leading contributor to growth and assistance has been given to contractors with a view towards promoting construction activity in all sectors, including the housing sector, the business sector, and the commercial real estate sector.

Earlier this week Cabinet approved a package of concessions for contractors that is expected to reduce the labour on construction projects by as much as 8 percent.