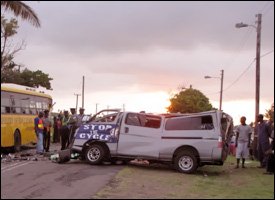 The Police are investigating a traffic accident which occurred along the  Island Main Road at Belle Vue at about 4:30 pm on September 9th 2009.  Investigations revealed that a school bus driven by Alphonso Isaac of Old Road was travelling towards Saddlers direction when there was a collision with a motor omnibus which was travelling in the opposite direction.  Several students who were travelling on the school bus sustained minor injuries and were taken to the JNF Hospital where they were treated and discharged.  The driver of the omnibus, Clyde Lake of Tabernacle who was the sole occupant in the bus was pronounced dead on the scene by the District Medical Doctor.  Both vehicles were extensively damaged.  Investigations are ongoing.

Police are investigating a shooting which took place in Verchilds at about 3:00 am on September 9th 2009.  Investigations revealed that Gregory Flemming and his girl friend Karen Nichols were inside their home when they were shot.  Both persons were taken to the JNF Hospital where they were treated and warded.  One person was arrested, and is in custody assisting with the investigation.