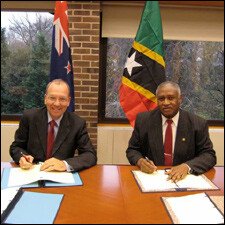 The Government of the Federation of St. Kitts and Nevis has signed two Organisation for Economic Cooperation and Development (OECD)-model Tax Information Exchange Agreements (TIEAs) with New Zealand and the Municipality of Liechtenstein.

The agreement with Liechtenstein, initialed by St. Kitts and Nevis Prime Minister and Minister of Foreign Affairs, Hon. Dr. Denzil L. Douglas while in Liechtenstein last month, was officially signed in Washington, D.C. on December 11th.

In November, Ambassador Williams also signed a Tax Information Exchange Agreement in Washington, D.C. on behalf of the Government of St. Kitts and Nevis with New Zealand. That country’s Ambassador to the United States, His Excellency Roy Ferguson signed on behalf of New Zealand.

These agreements bring to 7 the number of Tax Information Exchange Agreements that St. Kitts and Nevis has signed. TIEA’s have been signed with Monaco, New Zealand, The Netherlands, The Netherlands Antilles, Aruba, Denmark and Liechtenstein.

The Federation will need an additional 4 agreements in order to be removed from the OECD’s so-called Grey List.  The Federation has already initialed 10 other agreements – with the six Nordic countries which accounts for 6 agreements ““ the United Kingdom, Canada and Australia and is waiting for dates for the signing of these agreements to be given to the Federation by these countries.

The TIEA allows the signing parties to request information from each other that is relevant to a tax investigation. As provided in the agreement, such information would typically relate to bank accounts or the beneficial ownership of companies or trusts.