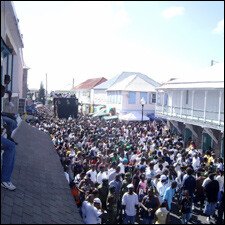 This was the message on Tuesday from St. Kitts and Nevis Prime Minister Hon. Dr. Denzil L. Douglas, who said denied that his St. Kitts-Nevis Labour Party was entering a J’Ouvert troupe in this year’s carnival.

Dr. Douglas was responding to a well-know female supporter of the opposition People’s Action Movement (PAM) who asked during his weekly radio programme “Ask the PM,” why the St. Kitts-Nevis Labour Party was organising a J’Ouvert Morning troupe.

“The Labour Party ain’t having a J’Ouvert morning troupe. Not under my leadership. We have taken a very clear position that carnival must not be politicized. My Party will not politicise Carnival,” said Prime Minister Douglas, who pointed a finger at the PAM party for advertising a J’Ouvert troupe.

Dr. Douglas said the Labour Party is telling the nationals and residents that red is the colour of Christmas and they must wear red.

“Red is the colour of Christmas. Two symbols of Christmas are red and the star. And people must wear a star on whatever they are wearing,” said Prime Minister Douglas.

Historians and many nationals recall the days when PAM politicised carnival celebrations with two different groups staging competing queen shows and parades. This came to an end in the early 1970’s with the National Carnival Act, which appointed a group of business and civic leaders organizing the national events.