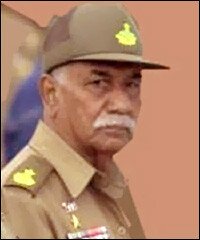 St. Kitts and Nevis Prime Minister Hon. Dr. Denzil L. Douglas has expressed sadness at the recent passing of Commander of the Revolution and Deputy President of the Council of Ministers in Cuba, Juan Almeida Bosque.

Prime Minister Douglas on Saturday was one of scores of nationals of St. Kitts and Nevis who signed the Book of Condolence at the Embassy of Cuba.

In a letter to Cuba’s President, His Excellency Raul Castro, said Cuba “has lost a political stalwart and a great statesman who made a significant contribution to the advancement of his people and country. His untiring efforts in Cuba’s struggle will long be remembered.”

Almeida died on September 11th of a heart attack at the age of 82. He was one of Fidel Castro’s commanders during the revolutionary struggle and a mainstay in Cuba’s government.

He had asked that he be buried at that spot in the Sierra Maestra, which is considered to be the “cradle of the Cuban Revolution,” because it was the area where in 1956, Fidel Castro and a group that included Almeida launched the armed struggle against the dictatorship of Fulgencio Batista that eventually brought Castro to power on Jan. 1, 1959.

Almeida’s remains were laid to rest with military honors and floral offerings in the name of the Castro brothers, the Cuban people and his relatives.

Before its arrival at the mausoleum, the casket was transported from the military airport at Santiago de Cuba aboard a gun carriage and passed through the streets of Cuba’s second-largest city, which Almeida has represented in the national legislature.

Thousands of people solemnly awaited its passage and from city hall a rain of rose petals fell over the coffin.

Former President Fidel Castro in an article praised the “exemplary conduct” of his comrade-in-arms and said that “he is more alive today than ever.”

Almeida, born Feb. 17, 1927, in Havana, was one of several vice presidents in the Council of State and a member of the Communist Party Politburo.