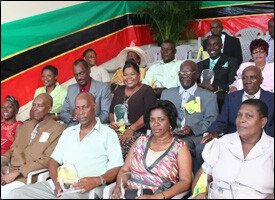 Eighteen persons were awarded for their contribution to service on Nevis during the 26th anniversary of St. Kitts and Nevis Independence celebrations. The awards were presented by Deputy Governor General His Honour Eustace John at Grove Park on September 19.

This year Mr. Norman Jones was the only one awarded for his contribution to Public Service. However, two persons namely Mr. Morrison Ward and Mrs. Eileen Walwyn were honoured for their contribution to Education.

Mr. James “Ghandi” Phillip was awarded for his contribution to Electricity Generation.

Each awardee received a plaque from the Deputy Governor General to rousing applause from Premier of Nevis Hon. Joseph Parry, other members of the Nevis Island Administration, family and well wishers who were at the Park to witness the momentous occasion.