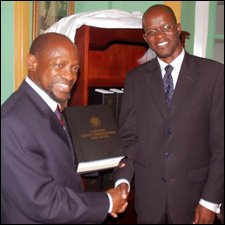 After nearly 50 years, the laws of the twin-island Federation have been revised. The last revision took place in 1961.

Speaking at the launching of the 13-volume edition at Government House, Prime Minister, Hon. Dr. Denzil L. Douglas, described the event as historic.

He noted that it was in 2002, during the second term of his Administration, that a commitment was made to consolidate, revise and publish a New Revised Edition of the Laws of St. Christopher and Nevis.

“My Government also made a commitment to establish a sound and sustainable mechanism to ensure future regular publication of law revision supplements. As you are aware, our laws were last revised in 1961. This means that prior to the consolidation, revision and preparation of the New Revised Edition (2002) which is being launched today, our laws have not been updated for a period of over 48 years!

This state of affairs has caused much frustration among the users of our laws and was unacceptable to my Government, hence the launching of the Law Reform Revision Project today.

He said that St. Kitts and Nevis will be one of the few Caribbean territories boasting a modernized set of laws with mechanisms and systems in place to continuously update and revise the laws in the future.

Dr. Douglas noted that prior to the publication of the New Revised Edition, it was extremely difficult to locate and ascertain the current state of the law in many areas.

He said that legal practitioners and other users of the law would have to wade through several documents including amendments to find the law as it stands today.

“At the end of that gruelling exercise there would still be some uncertainty as to the current state of the law.  This has had a negative effect on our legal system and our dispensation of justice. Moreover, there were some inconsistencies, discrepancies and mistakes in our written laws which were identified by the Law Revision Team. The necessary Law Revision (Amendment) Bills were prepared and tabled in the National Assembly to remove those inconsistencies, discrepancies and mistakes,” said Prime Minister Douglas as he delivered the featured address.

He said that the launch of the New Revised Edition of laws today would put an end to the frustration, the uncertainty and the difficulties in ascertaining the true and current state of the law and pointed to the benefits.

“Users will have accessibility – having created a reliable electronic database of our laws, we can now quickly access any written law up to the year 2002; Reliability – in that any written law can now be quickly located as and when such written law is required. Consistency – in that legal issues or matters will be dealt with in a consistent manner as a result of having a reliable laws database,” said Prime Minister Douglas.

He said the revised laws would also enhance the proficiency and integrity of the judiciary and the legal profession, thereby creating certainty in the legal system and has resulted in the building of local capacity to ensure the sustainability of the laws database that has been created.   This has been achieved through the training of our local people in Desk Top Publishing.

“There will be no vast amount of funds required in the future for the consolidation, revision and preparation of law revision supplements once the annual updates are made to this New Revised Edition,” said Dr. Douglas, who further pointed out that an electronic laws database will be provided to ensure the foundation for reviewing and reforming the local laws, especially social legislation which affect the welfare of the people particularly those who are most vulnerable.

“It will also provide the foundation for reviewing our Constitution which is one of the priorities of my Government during this term and create a mechanism to carefully examine the sub-regional, regional and international obligations of our Federation with a view to incorporating where necessary some of those obligations into our domestic laws,” Dr. Douglas added.

He said that the benefits clearly speak to the fact that the St. Kitts-Nevis Government is committed to upholding the rule of law, good governance and justice for all.

“This project has in effect laid down the necessary foundation upon which our democratic institutions will be further strengthened,” said Prime Minister Douglas.