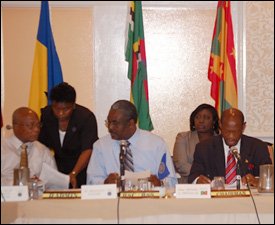 “You cannot divorce the challenge that the RSS faces from the financial situation the region fasces as well as violence and crime. This meeting is critical because the RSS can be called upon to rise to the challenges with so little financial resources and so we must examine the programme before us and look within the context of the realities of the financial situation,” said Prime Minister Douglas in brief opening remarks.

He said the RSS Council must continue to ensure there is no duplication and whether the RSS and the CARICOM Security framework can exit and the role the RSS  can play in both bodies with the security framework,” said Dr. Douglas.

The Council will also discuss the proposed RSS Vetting Policy, the Development of Anti-Corruption Strategies for the Public Services of the Member States of the Regional Security System; the RSS Training Academy and Coast Guard and Caribbean-US Security Cooperation Dialogue, the 2010/2011 Budget and the ICC WT20 West Indies 2010 Championship.

The Regional Security System (RSS) comprises the islands of Antigua and Barbuda, Barbados, the Commonwealth of Dominica, Grenada, St. Kitts and Nevis, St. Lucia and St. Vincent and the Grenadines.

The Council of Ministers is the supreme policy making body of the System and is made up of the Ministers’ responsible for Defence and Security in each Member State.