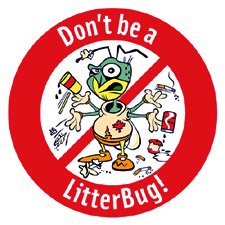 Don’t Be A Litterbug!

A warning from St. Kitts and Nevis Prime Minister that illegal dumping will have serious implications for the twin-island Federation.

“This appeal has implications ““ serious implications ““ for us all.  Sometimes we all make decisions that seem private and we assume that they are of no real impact or relevance to the rest of society.  Quite often, however, in ways we may not understand, the implications can be both far-reaching and quite severe,” said Prime Minister Douglas, who noted that global warming has created bizarre weather patterns world-wide, and “we in St. Kitts and Nevis have to act with vision, wisdom, and self-restraint in order to minimize the impact of these new and troubling weather patterns on our lives ““ not only this year, but from this point forward.”

During his recent radio call in programme, Prime Minister Douglas noted that for decades Kittitians and Nevisians have discarded their old and unwanted appliances in the ghauts.

“As far as the owners of these appliances are concerned, no-one can see these old fridges, stoves, and air conditioners after they go tumbling down the ghaut-side, and so, for them, [the owners], it is a case of out of sight, out of mind. It is not as simple as that, however,” warned Prime Minister Douglas.

“Nature, however, knows nothing about appliances.  Nature only knows that when there is heavy rain in the mountains, this water urgently has to find its way to the sea so that we, on the land, can be spared the dangerous, costly, and indeed, life-threatening floods that we have all seen, both here and abroad, over the years,” Dr. Douglas pointed out.

He said the ghauts are essential to nature’s will and wisdom in times of massive downpours, raging storms, and hurricanes, and when the watercourses that have been established from the mountains to the sea become clogged by hundreds of appliances that people throughout the Federation have thrown into the ghautsides, “we end up with serious problems, we end up with a potential for real disasters because the water coming down from the mountains, with such a phenomenal force, has nowhere to go. But yet it keeps coming ““ forcefully and furiously.  And blockages can lead to disaster.”

“I know that it is possible that many may not have thought about the impact of their actions before.  I know that many have not stopped to imagine what is happening when they and fifty, one hundred, three hundred other people all dump their appliances into the ghauts,” said Prime Minister Douglas.

He further warned that the time for everyone to stop and think is now – because each time someone does this they are directly endangering the lives of other Kittitians and Nevisians.

“This is very dangerous business, and this has got to stop.  We simply can no longer afford to have our thoughtlessness endanger the well-being of an entire nation,” said Prime Minister Douglas.