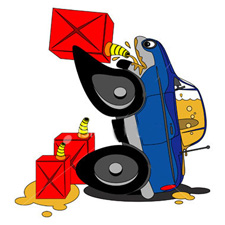 Loud Cars Will Add Excitement To Your Peaceful Nevis Holiday

Drag racing enthusiasts in St. Kitts and Nevis can look forward to an exciting Independence meet with almost 50 cars competing at the St. James Drag Raceway. This is according to Operations Manager for Pudgy Productions Mr. Christian Cozier.

The Trinidad-based company was contracted by the Nevis Island Administration [NIA] to improve the quality of Drag Racing.

Cozier said that while racers from across the Caribbean had shown interest in being part of the meet his company had secured the participation of cars from some of the bigger Caribbean islands.

“The big news is that we have 12 cars from Trinidad, another 12 from Antigua and two possibly three cars from St. Lucia coming up and they are all coming up on one trip,” he said.

Cozier said that despite the delayed planning start his team was working tirelessly to make this year’s meet a grand event with renovations being done at the track to accommodate the large number of cars that will be competing.

“One of the first projects that we’ve done at the facility is we’ve moved the pit area to outside of the fence before the grid. We are currently grading that down level and it will be paved and all the cars will stay out there. Only cars that are in current competition will come on the grid. The grid will now become a holding area,” he explained.

This, according to Cozier will enhance the quality of the meet by having races begin at a quicker pace.

As part of the company’s quest to improve the standard of the meet, persons will not be allowed beyond the spectators’ area.

“The Public Address [PA] system will be aimed along the fence towards the crowd so we’ll have a track announcer who is talking to the crowd on the hill. The disc jockey [DJ] will be moved up to the spectators’ area,” he said.

According to Cozier, competing cars are expected to arrive on September 16th and be taken to the Villa Grounds below the Charlestown Secondary School for a Car Show on September 17th. While the details for the final racing day have not yet been confirmed, practice sessions and competition for the slower classes will be on September 18th at the St. James Raceway from 10 AM.

Cozier also spoke of his company’s and the Ministry of Sports’ intent to raise the racers’ entrance fee and prize money in the not too distant future.

Persons can purchase daily tickets for the races at EC$20 or weekend passes for EC$30. There is no admission fee for Friday’s Car Show.

Meantime, the Department of Information learnt that Nevis will soon see rule changes to the sport of Drag Racing.

Upgrades to the current rules include all bike riders must wear a jacket. This is according to Pudgy Productions’ Christian Cozier.

Coming soon, said Cozier, “all riders will have to wear protective gloves and boots.” He also recommended that drivers purchase driving suits to protect them from fires.

“As the cars get faster and you go up in the classes, you realise that the safety gear goes up so [for] the open class cars it’s a three layer suit with the driving shoes and the socks and the gloves because these are cars now that if something does happen, its more violent because they are going faster,” Cozier said.