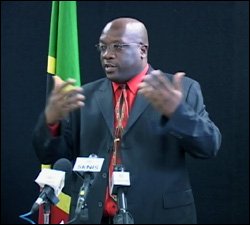 Minister Harris Speaking About The Economy

A report, issued by the Fiscal Division of the Ministry of Finance concerning the outcomes of the Government’s financial programme, has indicated that, “For the period January to November 2009, fiscal surpluses were recorded for the Recurrent Account, Overall and Primary Balances. These surpluses performed above what was expected for the period and surpassed the results of the previous year’s period.”

These outstanding results were also revealed at a huge Labour Party Election Campaign Rally at Warner Park on Saturday, 16th January 2010, by Dr the Hon Timothy Harris ““ Minister of Finance and Parliamentary Representative for the Electoral District of St. Christopher 7 for the past 16 years.

Dr. Harris highlighted and praised these excellent, significant and impressive performances in the fiscal operations of the Government, as being attributable, in large measure, to the competence and astuteness of the Labour Party Administration, which has clearly demonstrated that it has capable hands in serious times.