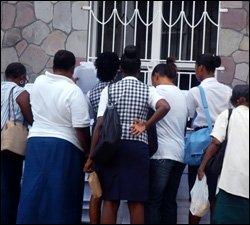 Heads of the CARICOM Electoral Mission and the Organisation of American States (OAS) Electoral Observer Mission to St. Kitts and Nevis arrive in St. Kitts on Wednesday to monitor the January 25th general elections.

In Washington, D.C. on Tuesday, St. Kitts and Nevis’ Permanent Representative to the Organization, His Excellency Dr. Izben C. Williams and the Assistant Secretary General of the Organization of American States (OAS), His Excellency Mr. Albert R. Ramdin signed the Agreement on Privilege and Immunities for the observers that will form part of the Electoral Observation Mission of the OAS to the federal elections to be held on January 25.

Mr. Griner has led OAS missions to St. Vincent and the Grenadines, and to Dominica. The OAS mission will be made up of 12 people who will cover the 11 electoral districts that divide the country, eight in Saint Kitts and three in Nevis.

“We are very satisfied because Saint Kitts and Nevis requested the observation of the OAS,” Ambassador Ramdin stated.

“We hope that the elections are orderly, peaceful, and organized in such a way that can surpass international scrutiny,” he added. “I wish the people of Saint Kitts and Nevis all the best in taking part of this democratic process.”

Ambassador Williams said St. Kitts and Nevis is very thankful for the participation of the OAS in the electoral process.

“We will do everything we can to give you an opportunity to observe how we proceed in a democratically and orderly manner. My government is, of course, a strong promoter not only of the democratic process but also of the institutions that speak to this process in a transparent manner and in a way that represents the interests of the people of the country.”

The agreement signed on Tuesday between the General Secretariat of the OAS and the Government of Saint Kitts and Nevis is the first habitual step toward guaranteeing that the Electoral Observation Mission can conduct its work appropriately.

The Procedure Agreement, to be signed in the near future, will define with further details the access and basic rules of the observers’ visit.

The CARICOM, OAS and Commonwealth delegations will also meet with the Chairman of the Electoral Commission, Mr. Hesketh Benjamin; Supervisor of Elections, Mr. Leroy Benjamin and representatives of political parties, the Chamber of Industry and Commerce, the Christian Council and the Evangelical Association.