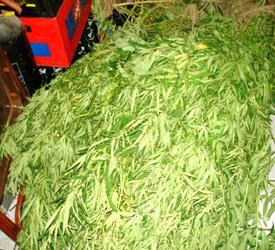 On Tuesday 15th September 2009, the Security Forces continued their program of joint operations in the Mc Knight and New Town areas.  Between 1:00 am and 7:00 am, members of the Drug Unit, SSU, Anti-Gang unit and the St. Kitts-Nevis Defence Force, executed five (5) search warrants on premises in these areas, for controlled drugs arms and ammunition.  Nothing illegal was found at the premises searched, however, a quantity of marijuana and several masks, gloves, vehicle licence plates, duct tape, tie straps, dark clothing and a hooded jacket were found in Newtown at unoccupied premises.  No one was held accountable for them.  They were seized and taken into custody for further investigations.
Members of the SSU conducted operations in Bouncing Hill Sandy Point, and uprooted over 300 marijuana plants from an empty lot of land.  The plants ranged in height from 2 to 6 feet.  No one was made accountable.

The following juveniles were convicted and sentenced as follows at juvenile court on September 14th 2009.:

1. A 14 year old boy from St.Pauls who was charged for larceny on September 10th  was placed on probation for 12 months to keep the peace and be of good behavior, to attend male therapy sessions, seek employment and not be seen in the company of undesirables.  He was also ordered to observe a curfew from 7:00 pm to 6:00 daily for the next three months.

2. A 16 year old boy from Tabernacle was taken before the court for being beyond care and control, and was placed on probation in the sum of $1,000.00 with one surety.  He is to attend school and classes regularly and punctually, observe a curfew at his mother’s home from 6:00pm to 6:00 am daily and he is not to be found in the company of undesirables.

3. Jermaine Henry of upper Cayon was charged on May 8th 2009 for possession of cannabis.  He was fined $600.00 in one month or one month in prisonment.

4. St.Claire Bartlette of Molyneaux was sentenced to prison for one month for making use of threats to kill on August 31st 2009.

At about 9:35 pm on September 14th 2009, Police responded to a report of shooting at Haynes Smith Village.  Investigations revealed that Damian Weekes-Hendricks of Trafalgar Village, Nigel “Iro” Browne of Mc Knight and Laughton Phillip of Cardin Avenue, were shot and injured outside a shop by an armed assailant.  They were taken to the JNF Hospital where they were treated.  Laughton Phillip subsequently died, while Browne and Hendricks were detained in stable condition.  No arrest has been made, investigations are ongoing.